Iconic birds on the brink: shocking data on the status of African Vultures spurs conservation action

Research by ecologists at the University of Reading has helped spotlight the plight of African Vultures, giving them a greater chance of survival. 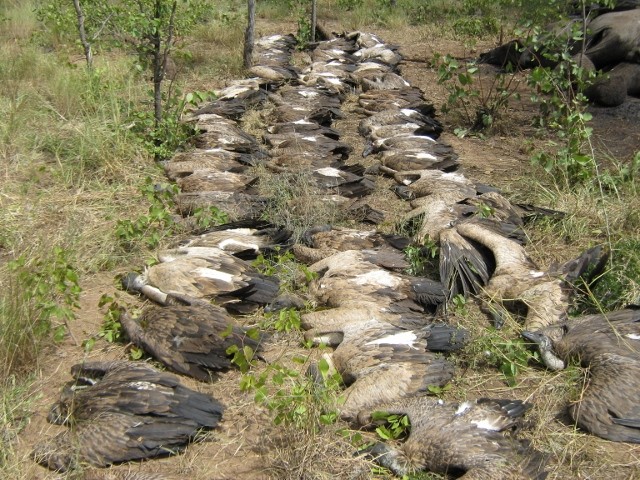 Vultures are iconic birds of prey, known for scavenging carcasses, but they were fast becoming the most threatened group of birds in the world. Conservationists became concerned that African vultures were headed for the same catastrophic decline seen in South Asian vultures in the 1990s. However, inadequate and patchy data meant the abundance, breeding rates and threats to African vultures were unclear.

A team from the University of Reading, led by Associate Professor in Ecology Dr Graham Holloway and visiting research fellow Dr Campbell Murn, are addressing this problem. They have revealed a clearer picture of the status of these birds in sub-Saharan Africa, demonstrating that African vultures are now virtually absent from many areas that are not officially protected. Several species have suffered a decline of more than 80% over three generations – some species by as much as 97%.

Poisoning, especially by poachers, poses the greatest threat. By circling overhead, vultures advertise the location of poaching operations to rangers. So, to eradicate this ‘problem’, after an elephant carcass has been butchered for its ivory, poachers lace it with poison to kill hundreds of scavenging birds.

Another two studies set new benchmark data for the White-headed Vulture. One provided the first detailed picture of this species’ breeding biology in South Africa’s Kruger National Park, revealing a productivity of just 0.69 chicks per pair per year. The second revealed the shockingly low abundance of this species across sub-Saharan Africa. It estimated the global population to be fewer than 5,500 individuals, down from the previous estimate of between 7,000 and 12,000.

Thanks to these insights, the International Union for Conservation in Nature (IUCN) raised the threat status of four vulture species from ‘Vulnerable’ to ‘Critically Endangered’. And The Convention on the Conservation of Migratory Species of Wild Animals commissioned the production of a Multi-speciesAction Plan to conserve African-Eurasian vultures (the MsAP, published in 2017).

As one of the key action points highlighted in the MsAP, the Hawk Conservancy Trust, Endangered Wildlife Trust and the University of Reading launched a Poison Intervention Training programme  that will reduce vulture death rates from poisoning by poachers. Response teams are trained and equipped with kits to decontaminate and investigate each poisoning scene. A poison response team discovering and dealing with a poisoned elephant carcass can save the lives of hundreds of vultures.

Dr Campbell Murn, visiting research fellow at Reading and Head of Conservation and Research at the Hawk Conservancy Trust said: “Our research has highlighted two key things. One is that poisoning by poachers is the biggest threat to vultures in southern Africa. The other is that our training and kit provision programme is the most effective way of firefighting this crisis situation.”

A shot at survival

Through painstaking collection and analysis of data, researchers in Reading and their counterparts revealed that the White-headed Vulture and other species of vultures are much rarer than previously thought. With poisoning events wiping out hundreds of birds at a time, these birds are truly on the brink of extinction.

Having put African vultures in the conservation spotlight, the researchers will keep working hard to ensure that these magnificent animals survive long into the future.

Further information on Dr Holloway’s publications can be found on his Staff Profile.