Hours of taped talks with Samuel Beckett get new home

Private recordings of playwright, novelist and poet Samuel Beckett, hidden away for three decades, will get a new home in a donation that will greatly expand the collection of known audio clips featuring the revered writer.

Recorded over several meetings at Beckett’s Paris retirement home in 1989 by the writer’s authorized biographer, Emeritus Professor James Knowlson, the tapes feature the Nobel Prize winner talking about his work, his family, cricket, his friendship with literary peer James Joyce and much more.

The tapes – which span seven hours of audio – have been donated to the University of Reading’s Beckett archive, the largest collection of materials relating to the Nobel prize-winning author in the world.

Jim Knowlson, who wrote to Beckett for the first time in 1970 as he set about creating a collection of the Irishman’s works for an exhibition at the University, said: “Previously, only about three minutes of Beckett’s voice existed, so these tapes provide an extremely rare insight into his life and character.”

“He hardly ever gave interviews, and I felt it was important that he didn’t feel ‘grilled’ when I spoke to him. So, during our conversations, we relaxed and laughed rather a lot; he sang to me; I sang a couple of George Brassens’ songs for him. We talked cricket, discussed his mother, his father, his brother, his aunt and uncles, his dogs, his nanny, local characters in Foxrock in Dublin, as well as his friendships with James Joyce, Jack B. Yeats, Tom MacGreevy. 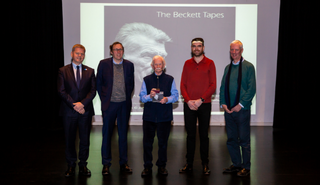 “We talked about our shared sceptical attitude towards institutionalised religion but common love of certain Protestant hymns, and most importantly, he gave me a precise, detailed account of his clandestine activities for a cell of the Resistance in Paris during World War II.

“Except for being remastered, the tapes have been kept in our home safe for more than thirty years.  Since I owe part of my career as a Beckett scholar, let alone becoming his ‘sole authorised biographer’ (Beckett’s words), to the fact that it was through the University of Reading that I met him so frequently to pick up the rich materials he had assembled for us, our family concluded that the tapes ought to be in Reading’s Beckett archive, So this is their new home and any rights that I held are now assigned to the ‘Beckett International Foundation’, a Charitable Trust of which the University is the Trustee.”

The donation comes after the University of Reading celebrated (belatedly because of Covid) the 50th anniversary of the original exhibition in 1971, which led to the establishment of the archive. The archive, managed by the Beckett International Foundation alongside Special Collections, is home to manuscripts, notebooks and papers related to the famed writer.

A packed weekend of literary events celebrating the anniversary took place on 4 and 5 November 2022, and featured talks by guest speakers from across the world as well as by University of Reading Beckett experts and current Beckett Creative Fellows. The fellowship provides recipients with a cash award and a mentorship opportunity with a leading Beckett scholar, as well as access to the Beckett holdings at the University’s Special Collections.

Bennett has written two acclaimed works of fiction Pond (2015) and Checkout 19 (2022). Having worked extensively in theatre, Bennett is a big admirer of Beckett’s plays and his prose has a major influence on her work. In an interview with The Guardian, she remarked how reading Beckett gives her ‘a sense of space and a kind of an ease.’

Okotie is a fiction writer and essayist who has written a trilogy of acclaimed novels, Whatever Happened to Harold Absalon?, In the Absence of Absalon, and After Absalon. Okotie readily acknowledges the influence of Beckett on his work.