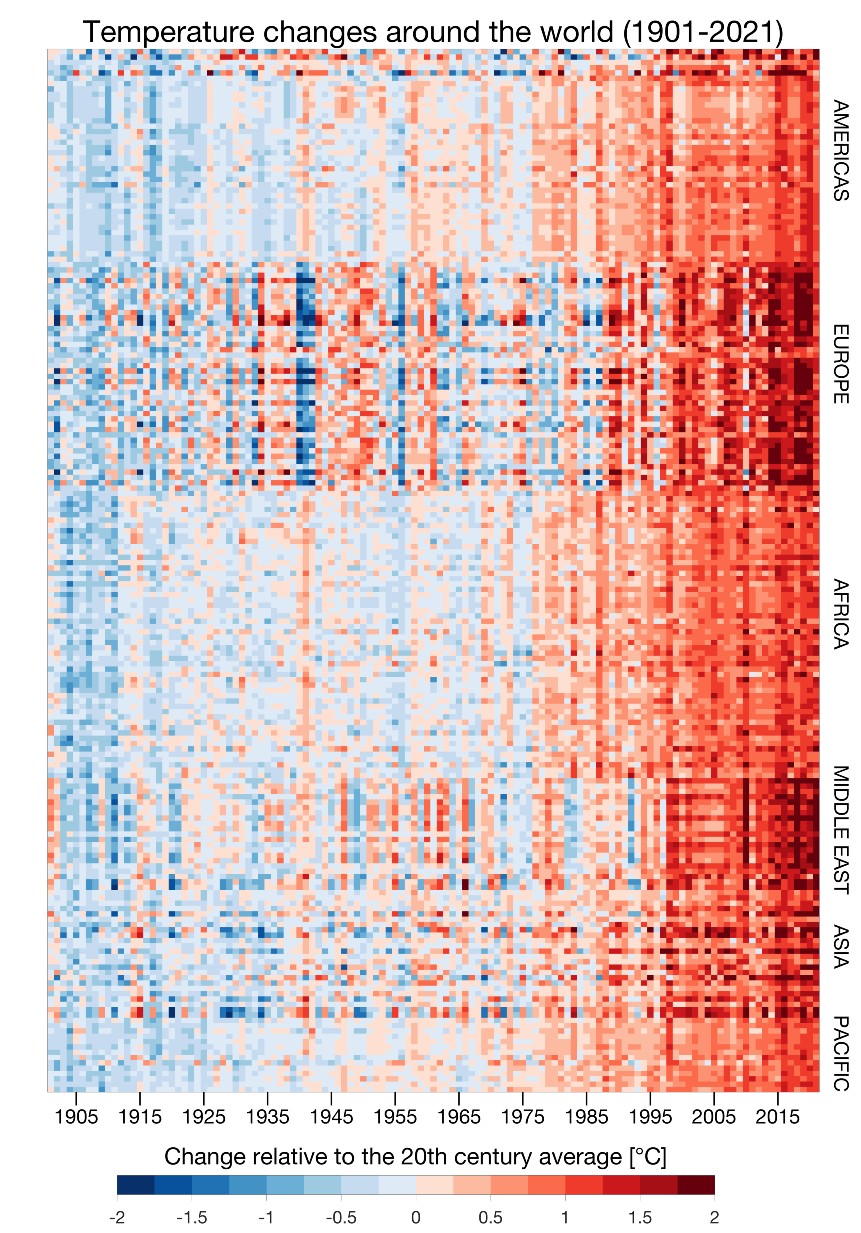 Climate stripes updated with the latest temperature data for more than 200 countries have been combined into one mega-graphic illustrating how climate change is impacting every corner of the globe.

The popular visualisations created by Professor Ed Hawkins at the University of Reading, and available to download for free at showyourstripes.info, now have added stripes depicting the average temperature in 2021.

The merged image, stacking the stripes for almost every country in the world, is made up around a billion pieces of data and provides the clearest picture yet that temperatures are rising across the globe.

Its publication coincides with the release of the latest report from the Intergovernmental Panel on Climate Change (IPCC) on the impacts a warming climate is having on the planet, from melting ice sheets to areas becoming too hot to live in or grow crops.

Professor Hawkins said: “With every new report published on climate change, we become more certain that the consequences for the planet will be dire if we do not act.

“The latest IPCC report warns that we are rapidly moving past the window of opportunity to avoid the most destructive impacts of climate change. It contains a clear message that doing nothing is not an option.

“The new warming stripes support the report’s findings that we are already seeing stark impacts of climate change all around us. I hope that presenting the latest evidence in a clear and accessible way will again encourage people to think about the course the world is on, and how we can change that.”

The stripes have risen to fame in recent years due to their simple yet striking design, illustrating annual temperatures using shades of red and blue to show where temperatures were higher or lower in a given year than the average for the period as a whole.

While the graphics for individual countries show annual temperatures compared to the long-term average within that country, the combined version shows how the changes in temperature for each country compare across the globe.

This means the new graphic shows more clearly which parts of the world are heating up fastest due to climate change, with regions like Europe glowing a vivid red.

Climate scientists at the University are part of a team providing climate data and analysis to the UK government, to help it plan its strategy for adapting to climate change and cutting emissions.

More recently, the University has played a leading role in bringing about a step change in climate education for young people, through holding a Climate Education Summit and publishing an action plan jointly with partners, including the Department for Education.