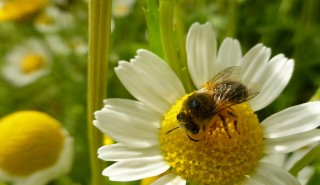 Supporting and enhancing pollinators could help stabilise the production of important crops like oilseeds and fruit, reducing the sort of uncertainty that causes food price spikes, new research has shown.

Scientists at the University of Reading analysed years of data on the poorly understood effect of pollinators on crop yield stability. They found there was 32% less variation in the yields of plants visited by bees and other pollinators than those grown in absence of pollinators.

The study, published in the journal Ecology Letters, suggests that pollinators can help to mitigate supply issues and market shocks that cause global price spikes, like those being seen this year, by holding food supplies steady.

The publication marks the start of Bees’ Needs Week 2022 (18-24 July), a UK Government-led campaign championing pollinators and their benefits. A launch event led by University of Reading scientists is taking place today (Monday 18 July) at the Tower of London, where a Superbloom attraction made up of 20 million wildflowers in the moat is on display to the public all summer.

Dr Jake Bishop, a crop science researcher at the University of Reading, who led the study, said: “Our findings suggest that preserving pollinators provides a double benefit, reducing fluctuations in food supplies as well as boosting supplies in the first place.

“Stable and predictable production of nutritious food is a necessity for farmers and for global food security. We are seeing right now that instability or shocks across the food system can lead to dramatic increases in food price.

“The research has revealed another reason why pollinators are so important to our planet, and to so many families who are struggling to feed themselves with sufficient, safe and nutritious food.

“Pollinators are particularly important in the production of fruit and vegetable crops. Around half of the experiments we analysed were testing the effect of real pollinator populations in real crop fields so our results illustrate the benefits that pollinators are currently providing.”

While the benefits of pollinators to crop yield are well known, their effect on crop stability was poorly understood until now.

The new research combined the results of more than 200 previous experiments which compared the yield of crop plants with and without insect pollination. The study focused on three globally important and representative crop species: faba bean, oilseed rape and apples.

The stabilising effect of pollination is thought to be due to a ceiling effect, whereby the yield increase resulting from insect pollination hits an upper limit due to limitations of other resources that support crop growth such as soil nutrients or access to water. This creates a raised and more stable baseline against which there is less fluctuation in yield.

Current food price increases are being driven by a range of actors including high oil prices and the reduced ability of Ukraine to export its products after being invaded by Russia. Ukraine is the world’s largest exporter of sunflower oil and provides around 10% of the world’s wheat exports.

A previous food price spike in 2007-08, when the price of major global food crops approximately doubled, is thought to have been partially driven by production losses of wheat amounting to a loss of approximately 4.6% globally. 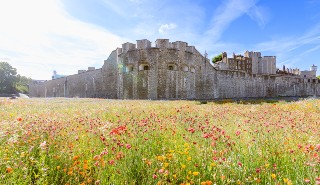 Bees’ Needs Week is run annually by the Department for Environment, Food and Rural Affairs (Defra).

The Tower of London Superbloom attraction has been designed by Historic Royal Palaces to attract pollinators through the creation of a thriving new natural landscape in an otherwise urban area. Open all summer, 20 million seeds have now sprung into bloom in the Tower’s moat, with the flowers providing a rich source of food and nectar for pollinators to create a new biodiverse habitat in the heart of London.

University of Reading scientists will be running an exhibition outside the Tower of London on Monday 18 July, where they will be on hand to answer visitors’ questions and share their expansive knowledge of pollinators.

The Reading Bee Team, made up of scientists at The University of Reading, carry out research revealing the benefits pollinators provide for food production and the environment.

The Team has supported Bees’ Needs Week for a number of years, with scientists running activities in Carnaby Street in 2018 and 2019.

Its scientists have written reports for the United Nations on pollinator decline and played leading roles in the Intergovernmental Science-Policy Platform on Biodiversity and Ecosystem Services (IPBES).