Supermarkets a 'spiderweb' of sensory experiences 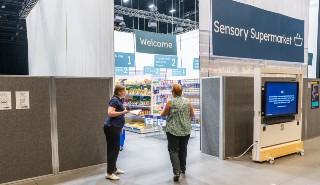 The study, published in the journal Autism in Adulthood, is based on a series of focus groups involving autistic people to find out which public-facing spaces they found challenging to experience and which spaces they found more enabling. The research was carried out as part of the Sensory Street project, a collaboration between the Universities of Reading and Oxford, funded by the Wellcome Trust.

The most commonly reported disabling sensory environments included supermarkets, eateries, highstreets and town centres, public transport, healthcare settings, retail shops and shopping centres. But it was supermarkets that came up most often.

Autistic people involved in the study described visiting these environments as a complex “spiderweb” of sensory experiences. One participant said: “I want to say to people, it’s about actually looking at all those little things that build up.” This can lead to sensory overload. Sensory aspects of supermarkets that autistic people reported finding challenging included: loud noises (such as from self-checkout machines, background music and announcements); differences in temperature (cold areas in the chilled sections); strong smells (the fruit and veg aisles); bright, artificial lighting; cluttered, towering shelves; and reflective flooring, as well as the feeling of people bumping into them in crowded spaces.

Other factors autistic people identified as being challenging in supermarkets included how unpredictable the environment is, how difficult it is to escape from it and staff not being properly trained to provide help and assistance if required.

In response to the findings of the research, the team created an immersive supermarket experience at UCL’s Person Environment Activity Research Lab (PEARL) in August this year, to highlight the sensory aspects of supermarkets that many autistic people can find challenging.

Visitors to the event, who included representatives from large retailers, councillors and community champions, walked through the ‘Sensory Supermarket’ twice. The first time the sensory aspects of the environment were made more obvious. There were loud, unpredictable noises including background music, bright, artificial lights and strong smells. The second time people walked through the supermarket, the sounds and lights were lowered, and soothing nature sounds were played.

Dr Cathy Manning, from the University of Reading, said: “At our Sensory Supermarket event, we aimed to raise awareness of sensory processing differences and to give businesses and individuals ideas about how spaces could be made more accessible for autistic people. “Interestingly, even non-autistic visitors to the Sensory Supermarket reported rushing through the supermarket and missing things the first time they walked through, because the sensory input was overwhelming. This means that changing the sensory environment could not only make supermarkets more inclusive, but could also improve the shopping experience for everyone. And this makes good business sense for supermarkets.”

Along with reducing sounds and lighting, supermarkets could make their environments more accessible by providing a map of the store layout and the locations of different sensory aspects (e.g., chillers, fish counters) so that autistic people know what to expect, as well as providing a quiet area for people to recover from feelings of sensory overload. The study also highlighted the importance of supermarket staff being trained to be more understanding of sensory processing differences.

Gemma Gray, the Community Champion for ASDA Dagenham who attended the Sensory Supermarket event, said: “The Sensory Supermarket event was incredibly educational. My role as the Community Champion means that if anyone is having a hard time in-store I will go and help them. I usually do this in the aisle but now I know that taking them to a quieter place will make things much easier for them.

“There are lots of other ideas I’ll take back to the store too, like the implementing of the store map - that is such an easy thing that we can do. Plus, with the self-scan machines we have the ability to turn the volume down, but the customers just don't know that. All we need to do there is put up a sign giving people the option.”

The Sensory Street team now plan to work with supermarkets and other businesses to make their spaces more accessible for autistic people and others with sensory processing differences. Further information about the project and its aims can be found on the Sensory Street website.