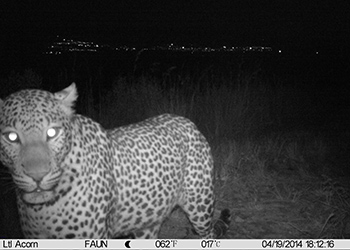 Leopards are charismatic ambush predators, one of the few species of big cat which is widespread outside of protected areas. The interactions between people and leopards has been one of conflict and death, most typically for the leopard. This arises from leopards preying upon domestic livestock, causing potential hardship to those who suffer. In some regions leopards kill people, causing much more than financial loss.

Herders and others will aggressively defend their animals from leopards, which are also targeted by poachers and those who wish to use body parts for traditional medicine. We are working to mitigate the conflict between leopards and farmers in South Africa, studying the movements and behaviour of leopards (and other predatory mammals) using a network of camera traps and expert spoor trackers.