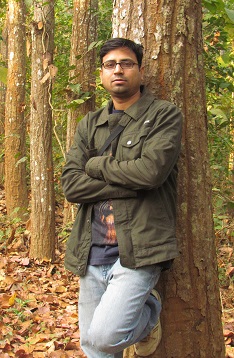 I have been actively involved in wildlife research for the last 10 years and have contributed to wildlife conservation. As a field researcher, I have worked on various wildlife projects addressing various issues. I joined IUCN SSC- Bear Specialist Group in 2009 in the Sloth bear expert team and Human Bear conflict expert team. I belong to Nilagiri a small town in Eastern India. I did my Masters in Wildlife & Conservation Biology and Joined Wildlife Institute of India to study Ecology of Sloth bears in Mount Abu, India. My major interests lie in conducting conservation biology studies, designing experimental and observational field ecological studies. I have specific inclinations towards large carnivores, Human-wildlife interaction. On the conservation front, I am working for the better coexistence of Human and wildlife in a Human-dominated landscape.

Negative human-sloth bear interactions are becoming more common in parts of India, particularly in areas that are located at the interface of forests and villages. The past ranging areas of sloth bear are now under human alteration in form of settlements, agricultural development and under other developmental projects. As a result, sloth bears come in interaction with people during their traditional movement areas. By nature Sloth bears are nocturnal (in disturbed habitat) and search out for food from early evening to early morning. During this period whenever they encounter any human, they attack in self-defence. When conflicts between sloth bears and humans occur the outcome can result in a human mauling or death. Conflicts between local people and sloth bears are also increasing, promoting negative attitudes towards sloth bears.

The project study is proposed in a bear conflict-affected zone of Eastern India. We will examine the distribution and conservation action of the habitat use and biotic pressure on bear habitat in the affected region, the result will definitely enlighten the root cause of the conflict with the status and extent of the issue related to the changing scenario. The plan is to understand the nature and spaces overlapping among the human and sloth-bear. Understanding how villagers use and depend upon sloth bear habitat, which will scope us to develop a site-specific human-sloth bear management plans aimed at minimizing negative interactions. We will also involve the local community attitude and prospect towards the Bear conservation further with this experimental process. This is extremely important since sloth bear is an endangered species and distorted information can not only adversely affect the conservation efforts with respect to species but its very nature, it is capable of negating the overall conservation of our ecosystems. While the proposed study is specific to selected sites, the project outcome would have the potential of application to similar habitat situation and overabundant populations of bears elsewhere.