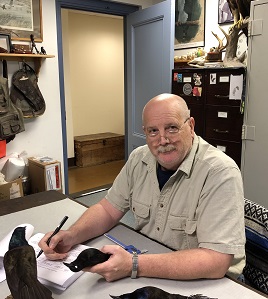 Peter has had an interest in natural history, particularly ornithology, since boyhood. Birds of prey fascinated him and he received one of the first falconry licenses issued by New York State at the age of eighteen. He studied zoology and practiced falconry under Prof. Heinz Meng at the State University of New York at New Paltz.

Peter is the author, with Carol A. Butler, of How Fast Can A Falcon Dive? Fascinating Answers to Questions About Birds of Prey published by Rutgers University Press.

As a Reading University Ph.D. student working away, Peter is researching the evolutionary and ecological diversity of the common grackle Quiscalus quiscula, a New World blackbird in the family Icteridae. Using field techniques, museum-based specimen collections, modern statistical analysis, DNA and vocalization studies, he hopes to resolve some questions of speciation and biogeography in this taxon, which were beyond the reach of past investigators. Fieldwork in search of grackles has taken him to such diverse habitats as the longleaf pine and sawgrass wetlands of Florida, deciduous woodlands and farmland of eastern and northern New York as well as dumpsters behind fast food joints in suburban areas where grackles find easy meals. Peter’s spring 2019 field season will bring him to the Florida Keys and western Iowa in search of additional material for analysis. Currently he is Senior Scientific Assistant/Senior Museum Specialist in the Department of Ornithology at the American Museum of Natural History and an adjunct faculty member in the Department of Biology at The City College of the City University of New York.