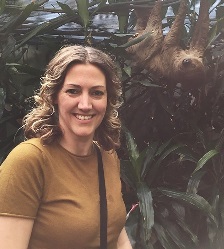 I am passionate about wildlife and conservation and have been heavily involved in this field for over 10 years. My work highlights include protecting leatherback sea turtles in Costa Rica, monitoring grey whales in Vancouver, and mangrove forest restoration in the Florida Keys.

After gaining a BSc in Ecology & Conservation in 2010, I set up my own marine conservation charity, Ocean Focus, in July, 2011. Ocean Focus was an educational charity that raised awareness about conservation and marine issues such as overfishing and shark finning. Later in 2012, I worked as an Environmental Educator at The Living Rainforest & Trust for Sustainable Living, where I educated school children about the importance of conserving the world's rainforests and living sustainably. I am also a keen advocate for women in science and progressed my career by becoming a science lecturer in 2014.

More than a thousand species of exotic animals are kept as pets in the UK, outnumbering the range of domesticated species traditionally owned, such as dogs and cats, making exotic animals, and particularly reptiles, one of the largest growing sectors in the UK pet trade. Along with the exotic pet trade's growth in popularity, so too have the questions about the trade's impact on species conservation and welfare, as well as human and environmental health in the form of human-animal transmitted diseases (zoonosis) and species colonisation. These factors are highly contentious and attract lively debate between traders, welfare organisations, veterinarians, and conservationists' world over.

As well as controversy relating to animal sourcing, the trade also raises major animal welfare concerns. Welfare is at the centre of the exotic pet trade debate with many welfare organisations arguing that exotic species are just not suitable as companion animals. To address some of those concerns, there have been many initiatives over the last four decades to try and reduce demand and find solutions to address some of the conservation, welfare and health concerns, with a mixture of success and failure. Initiatives have included supply limitation strategies, such as trade bans, the use of positive and negative lists, as well as more education-based solutions, such as environmental education programmes and demand reduction strategies. Despite this, many conservation professionals feel that the overarching problems that still exist are largely due to the apparent laxities within the trade and the lack of regulation associated with it; especially since the rise of internet trading.

Previous research has examined conservation, health and welfare implications of the exotic pet trade, but few have examined the social aspects such as the motivational drivers, particularly in identifying the factors that influence individuals to buy exotic pets. Reducing demand through behaviour change has been identified as the single most important activity to address any decline or threat to a species. However, before we can begin to alter human behaviour and influence consumer choices and preferences, we need to identify the attributes that drive individuals to buy exotic animals in the first place. Understanding the drivers of human behaviour, nevertheless, is one of the hardest challenges faced by conservationists today as there are multiple factors that influence consumer preferences and behaviours. Therefore, it is important to address all factors, both internal and external, from personal and social factors to environmental factors. Focussing on environmental factors alone, for example, such as legislation or governmental policy - which has been the basis for many initiatives to reduce trade in endangered species - while ignoring personal and social factors, can lead to failure because it doesn't consider the interrelated nature of the factors and how individuals are greatly influenced by other individuals, as well as the social environment in which they live.

This research aims to derive a deeper understanding of the factors affecting Britain's exotic pet trade with a goal of establishing the motivational drivers that influence the British public to buy exotic pets. The results from this study can inform decisions useful towards the development of education programmes and demand reduction strategies that aim to reduce overall demand and improve welfare standards for exotic animals in trade.

Our project
Check out the details of our Urban Bird Conservation project to find out how you can take part.
See also
Things to do now