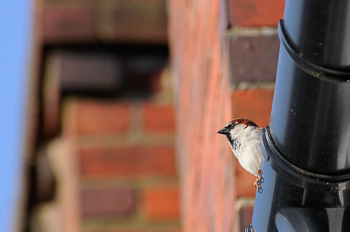 People are the most important ecosystem engineers. We build cities, convert huge areas to agriculture and directly and indirectly alter the abundance of the species that surround us. Our group works to understand how human activity affects ecological interactions at a range of scales, in particular trying to uncover some of the unexpected and unpredicted consequences of our behaviour.

Our current work is in three areas:

In Urban Ecology we look at two areas:

1) Supplementary feeding of birds - Whether our efforts to come close to wildlife and nature has an indirect effect on non-target species? In the UK almost half of home owners provide supplementary food for birds, providing us with an opportunity to study the consequences for other species of our efforts to support some species. At the same time we provide plants, ponds and other habitats to encourage wildlife, while providing homes to predators and barriers to species movements. How do these changes to urban ecosystems influence the structure of food webs in our towns and cities?

2) Uncovering the hidden world of cats - We compare the movements of cats in an urban environment with those living next to a green area to see if this affects how far they roam. We are also interested in recording any "gifts" brought back home to see if this varies with how far they are roaming from their home. This builds on our previous work.

In Insect Ecology we ask fundamental questions about how insects and their natural enemies interact, and use this to understand fundamental ecological processes and applying this so that we can manage insect pests. Insect natural enemies such as parasitoid wasps are commonly used to control pests, but how is their effectiveness influenced by our planting practises? Do we encourage the spread of hidden diseases by growing plants in monoculture, and if we do, how does this affect host-parasitoid interactions?

In Human-Wildlife Conflict we study leopards, asking how we can work to reduce threats to free ranging leopards in areas outside of National Parks. Leopards can threaten livestock, and as a result may be killed by those wishing to protect them. Our study investigates both leopard behaviour and the attitudes of farmers in South Africa.

We found that almost 4500 households feed red kites in greater Reading, explaining why this raptor is now a common urban sight. Most people feed red kites to get close to them, providing chicken and other meats. This work has been published in the journals Bird Study and Ibis.

We found that attracting birds to feeders results in a decrease in insects around the feeders, suggesting that we may be altering the diversity and abundance of often overlooked species in urban ecosystems. This work has been published in Basic and Applied Ecology and Urban Ecosystems.

In the largest study of its kind, we found that food provided by garden owners for wild birds could theoretically support over 100 million birds! This work is published in Acta Ornithologica.

We found that pet cats may be responsible for predating over 188 million birds and small mammals in the UK a year. Few means of mitigating this were considered acceptable by cat owners. Each cat typically ranges over an area of almost two hectares, suggesting that areas sensitive to wildlife disturbance should have a buffer zone away from domestic dwellings of some 3-400m. This work has been published in PLoS ONE and Urban Ecosystems.

We worked to provide a beautiful and highly biodiverse alternative to the traditional grass lawn, using low growing, mowable and robust flowering plants. This work has resulted in new flower lawns being planted in urban parks in London and Reading, a silver medal at the Chelsea Flower Show. This work has been published in Biodiversity and Conservation, Landscape and Ecological Engineering, Urban Forestry and Urban Greening and Studies in the History of Gardens and Designed Landscapes.

We found that adult male leopards can maintain non-agressive relationships with both their offspring and grand-offspring. This work has been published in African Journal of Ecology.

We have studied an unusual ant-plant system where the acacia can host up to four species of ant mutualists. These ants help protect the plants from herbivory, while the ants gain specialised thorns, which are used by the ant colonies. This work has been published in Insectes Sociaux, African Journal of Ecology and Myremecological News.

We found that there is a legacy of oil palm plantations, which in spite of regeneration to secondary forest, fail to regain the frog and toad species lost. This work was published in the Herpetological Bulletin.