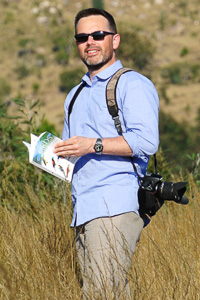 I have been passionate about wildlife since an early age, spending my formative years in the wilds of the west of Ireland surveying birds and bringing bits of the countryside into my home. I completed my BSc in Zoology at Imperial College London, and a PhD in Evolutionary Biology at Imperial College at Silwood Park supervised by Professor Sir Charles Godfray FRS. Following a brief post-doctoral stint at the NERC Centre for Population Biology at Imperial, I joined Reading as a lecturer in Zoology, progressing on to become full Professor of Ecology.

I have played a significant role in University leadership alongside my teaching and research. Most notably I was Head of School of Biological Sciences for seven years (2010-2017), leading a transformation in the School's size and success. I am currently Pro-Vice Chancellor (Academic Resource and Planning), with responsibility for oversight of academic Schools, staff deployment, the overall course programme, and helping shape the University's capital investment programme in teaching and research facilities.

My research has two overlapping and (where possible) integrated strands. First, I work on human-wildlife interactions, asking how the choices people make have unforeseen consequences for species. Much of this work is centred on urban ecosystems, where we ask questions about exceptionally widespread practices, such as the consequences of the provision of supplementary food for birds (~50% of households in the UK feed garden birds), and the effects of domestic cats (almost 11 million in the UK) on wildlife. Current projects involve asking why red kites are again an urban species, and why urban areas are so poor for butterflies.

Second, I am fascinated by questions of insect ecology. One major area of research focuses on how patterns of interactions between predators and prey can be altered by indirect effects, primarily using aphid-natural enemy interactions as a model system. Current projects ask how the presence of mutualistic ants affects such interactions in an urban context, and how ubiquitous plant pathogens such as Botrytis alter interactions at higher trophic levels. The latter emphasises insect pest species, and other current work focuses on how honeybee ectoparasites may be managed by rearing conditions, and the management of a significant stored product pest in Ghana.

What is clear is that the research focus changes as interesting questions arise. In the recent past projects have focused on leopard conservation in South Africa, ant-plant mutualisms in Namibia, frog/toad diversity in Malaysian Oil Palm plantations, and the replacement of grass lawns by flower lawns. Supporting research, I am Associate Editor (and former sole Editor) of the journal Ecological Entomology and I am on the editorial boards of the journals Insects and the European Journal of Entomology.

In addition to my research I passionately believe in the importance of teaching the next generation of ecologists, zoologists and people who care about the future for biodiversity. I teach modules on Introductory Ecology, Ornithology, and the Tropical Biology Field Course (formerly to Java and Borneo, Madagascar, now to Ecuador and the Galapagos). A core tenet of my approach is that at heart, ecology is a field science, and so students must have experience of field work, and a good working knowledge of natural history, if they are to succeed in the field. Each of my modules brings fieldwork to the fore. I am also an Associate Editor of Bioscience Horizons, a journal aimed at encouraging undergraduates and taught postgraduates to publish their work. I also always engage undergraduate project students with genuinely novel research, and several students have been authors on papers resulting from their work in leading journals.

I greatly value the opportunities that arise to share our work with the public, and our work has resulted in a considerable volume of media interest. In the past couple of years have made TV appearances on C4 and ITV news, on BBC's Autumnwatch and Countryfile Diaries, as well as on BBC Radio 4, 5Live, and various local radio stations. In addition our work has appeared in all the major UK newspapers, international news websites and frequently features in magazines such as BBC Wildlife. I was listed as one of the UK's 100 most influential men under the age of 40 by Esquire magazine. I regularly give public talks to a wide range of groups, gave the University's Children's Christmas Lecture, appeared at New Scientist Live for the Royal Society of Biology and was awarded a Silver Medal at the Chelsea Flower Show for our work on urban greening. I edited/authored two popular science books (30-Second Evolution, 30-Second Biology) which have been translated into over a dozen languages, and co-authored the Royal Entomological Society's hugely successful Garden Entomology booklet, tens of thousands of which have been distributed.

If you would like to know more about our work, or would like to work with us as a researcher, visitor or student, do get in touch!

See a full list of all Professor Mark Fellowes' publications