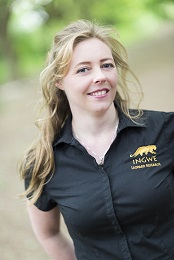 A passion for big cats came from a very early age and motivated me to follow career choices which would allow me to gain experience with different species. As a zoo keeper I expanded my knowledge working with captive animals including tigers and lions, but it was a visit to the Sumatran Tiger Project, Sumatra, as part of my Zoology degree which inspired me to take the leap into the wild. I trained as a field guide in South Africa and took guests on safari in big game areas in the Waterberg and the world famous Sabi Sands, in the Greater Kruger National Park, South Africa for several years. It was here where I learned about the African Leopard intimately and shared many encounters with viewers live on the internet site WildEarth. A new challenge then came in the form of head researcher with the Ingwe Leopard Research team based in Mpumalanga. During the 3 and half years I lived in a tent in order to collect data for the group and my PhD while running the volunteer program and guiding courses. I recently completed my PhD with the University of Reading which focused on the ecology and conservation biology of the African leopard and other carnivores and have now taken on a post doctoral researcher position with the university. I hope to assist the next generation of scientists as well as utilize the skills I have gained in South Africa to help conserve wildlife in both countries!

There are more than 10 million pet cats in the UK, and most live in urban and sub-urban areas. Despite how much we know about their home lives, we still have relatively little idea what they get up to when they leave through the cat flap.

The study aims to compare the movements of cats in an urban environment with those living next to a green area to see if this affects how far they roam. We are also interested in recording any "gifts" brought back home to see if this varies with how far they are roaming from their home. This builds on our previous work, so we have much experience in tracking cats and working with their owners to find out more about their the hidden life of their pets outside of their homes!

Many cat owners are interested in helping to protect wildlife, therefore we hope by understanding cat movement in more detail, we may be able to provide information which may help both cats and wildlife, by providing insights into what will help reduce the risks to cats when they are roaming, and how we may manage habitats to help protect birds and small mammals. 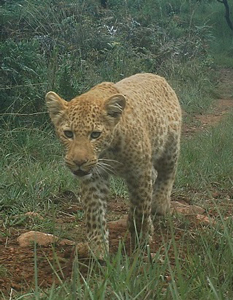 Leopards (Panthera pardus) are exceptionally elusive, making them extremely difficult to study. They are the only major African predator which exists outside of nature reserves in South Africa, leading to conflict with livestock farmers. Here, automated camera traps and track surveys were being used to record and monitor leopards and other carnivores in Thaba Tholo Wilderness Reserve, South Africa. Individual leopards can be identified by their unique spot patterns, allowing us to get to know them over their lifetimes and follow their progress. The data collected will be used to assess density, habitat use, activity patterns and human impact on leopards and other carnivores in the area which will be used to develop approaches to minimizing the human-leopard conflict, helping to protect one of the world's most charismatic species.

Camera trap technology is transforming our ability to collect data on species which would otherwise be impossible to study without resorting to invasive methods. This continuous data collection has already resulted in the discovery of species such as the cape fox (Vulpes lagopus) and samango monkey (Cercopithecus mitis labiatus) living outside their known distribution, as well as two extremely rare erythristic or "strawberry" leopards which are pale with red/brown rosettes, one of which was born on the reserve.