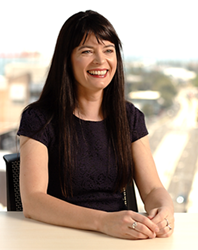 Associate Professor Amy Maguire (BA, LLB (Hons), PhD), is a leading scholar of human rights and public international law. She has published widely in highly ranked Australian and international journals and scholarly collections, with particular focus on the human rights accountability of governments, human rights institutions, self-determination, Indigenous rights, and the rights of displaced peoples. In 2021, Amy was appointed Deputy Head of the School of Law and Justice at the University of Newcastle, Australia. She serves in this role with responsibility for research training. She was also appointed as one of two founding Directors of the Centre for Law and Social Justice and was awarded a $250,000 grant (2021-2022) from the University’s research stimulus program, which she leveraged to employ post-doctoral fellows and research assistants to grow the School’s research capacity and lead high profile events that have swiftly connected the Centre to collaborators across Australia and internationally. Amy established and leads an international expert team to evaluate Australia’s performance during its inaugural term on the UN Human Rights Council (2018-2020). In 2018-2019, she was a Research Fellow at Queens University Belfast School of Law in Ireland, and in 2018 she was one of four scholars selected to represent the Australian and New Zealand Society of International Law at the Four Societies conference in Tokyo.

Amy is a public intellectual with national and global reach. Over 920,000 readers have accessed her 70+ articles for The Conversation and she is a leading author on that site in her fields of expertise. She is also sought after for expert media commentary across all platforms, including news programming for national broadcasters in Australia, Canada, Korea, the US and the UK. Amy also shapes public debate on human rights issues through invited talks and submissions to government inquiries. In 2015, she was invited to appear before the federal parliamentary inquiry into Australia's advocacy for the abolition of the death penalty and her contributions influenced the committee's recommendations to government and the subsequent Australian Government Strategy for the Abolition of the Death Penalty. Notably, her work was also cited in a 2022 parliamentary inquiry report into proposed religious discrimination law.

Amy’s engagement with the legal profession and the broader community demonstrates her commitment to translate research into social justice outcomes. She provides expert advice on the human rights compliance of proposed legislation as a member of the Human Rights Advisory Panel to the Queensland Parliament. From 2016 to 2018, Amy was co-chair of the Indigenous Rights sub-committee of Australian Lawyers for Human Rights. In that role, she collaborated with human rights lawyers and law students to promote the recognition and achievement of substantively equal rights for Indigenous peoples through research and advocacy. Amy has established collaborations with the Human Rights for NSW Alliance and the federal Charter of Rights campaign, and collaborates in research and human rights education with the Australian Human Rights Commission.

The quality of Amy’s research has been acknowledged globally, including through the inclusion of her work in a brief of evidence submitted to the UK Supreme Court in the Brexit case, participation in a meeting of the UN Working Group on Arbitrary Detention, and consultancy for the Human Security Lab at UMass Amherst on conscientious objection in Ukraine. Her research honours at the University of Newcastle include the 2020 Leadership Excellence Award, one of 13 NEWstar Fellowships for Research Leadership (2020) and the 2016 Early Career Researcher of the Year award. Her research excellence grounded her efforts to build access to higher education for Indigenous and refugee students, which attracted national and global recognition including Senior Fellowship of the global higher education academy, Advance HE (2021), a 2019 Australian Awards for University Teaching (AAUT) - Teaching Excellence Award and 2018 AAUT Citation for Outstanding Contributions to Student Learning.