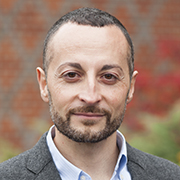 I welcome projects in the fields of conceptual and normative jurisprudence, critical legal theory, the governance of sexuality and gender (including from historical perspectives), and law and literature.

Aleardo Zanghellini is Professor of Law and Social Theory at the University of Reading. His academic writing is in the fields of legal, political and moral philosophy; the politics and governance of sexuality and gender; and law & literature. Aleardo’s scholarship regularly appears in leading international journals, and has broad international and transdisciplinary appeal. It is cited in the fields of law (including major reference work), moral philosophy, politics, as well as across a wide range of other disciplines, including in leading international journals in history and literature, women’s studies, and the most authoritative text in developmental psychology. It is also relied upon internationally in reports of public authorities, international agencies and government-sponsored inquiries, in government training manuals, by NGOs advocating for legal reform/social change, and by the general public.

Until 2010, Aleardo was employed at Macquarie University, in Sydney, Australia, where a quantitative study identified him as one of Australia's top researchers in law. To this day, Aleardo continues to serve as a reviewer for the Australian Research Council.

In addition to numerous articles, Aleardo is the author of two research monographs, The Sexual Constitution of Political Authority: The ‘Trials’ of Same-Sex Desire (2015), and Imaginative Resistance, Queer Fiction and The Law: Same-Sex Desire and the Good Life in Heteronormative Orders (2021), both published by Routledge. In 2018 Aleardo also published a work of historical fiction with Lethe Press, which attracted complimentary editorial reviews from Publishers Weekly and Kirkus, and was included in the GLBT roundtable of the American Library Association’s 2020 list of fiction titles exhibiting authentic LGBT+ content and commendable literary quality. Aleardo has also served as a judge of the Lambda Literary Awards.