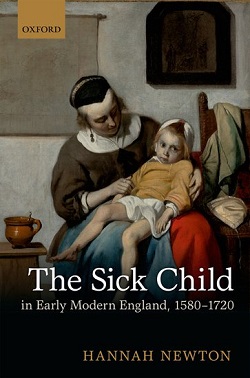 I'm a social and cultural historian of early modern England, specialising in the histories of medicine, emotions, and childhood. I undertook an MA and PhD in Medical History at the University of Exeter in 2005-2009, sponsored by the Wellcome Trust. My thesis formed the basis of a book, The Sick Child in Early Modern England, 1580-1720, published in 2012 by Oxford University Press. It examines medical perceptions and treatments of children's diseases, and explores the emotional and spiritual experiences of sick children and their parents. The Sick Child has been awarded the European Association for the History of Medicine and Health 2015 Book Award, and was short-listed for the Longman History Today 2013 Book Prize.

After completing The Sick Child, I took up a Wellcome Trust Medical Humanities Fellowship at the University of Cambridge (2011-2014), and researched for my second monograph, Misery to Mirth: Recovery from Illness in Early Modern England (OUP, 2018). 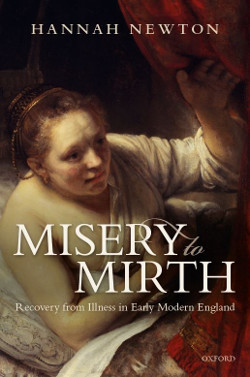 This book asks how recovery was defined and explained, and investigates the personal experiences of recovering patients and their relatives. It also explores the medical care provided to convalescents. The aim of the study is to rebalance and brighten our picture of early modern health, which hitherto has focused almost exclusively on the gloomy subjects of disease and death. During my time at Cambridge, I was also Director of Studies for the History and Philosophy of Science Department at St John's College, and occasional lecturer for the History Department.

Based at the University of Reading since 2014, I took up a five-year Wellcome Trust University Award (2016-2021), to embark on a new book project, Sensing Sickness in Early Modern England. Taking the dual perspectives of patients and their loved ones, I am exploring the sounds, sights, smells, tastes, and tactile sensations of the early modern sickchamber. The ultimate goal was  to reach a closer understanding of what it was like to be ill, or to witness the illness of others, in early modern England. The project included an element of public engagement: a series of interactive workshops for children. Entitled 'Sickly Smells & Putrid Potions', 7-10-year-olds will use their five senses to investigate the history of medicine.