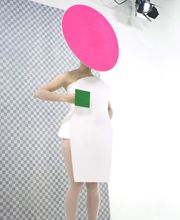 Christine creates performances and events under the monikers POLLYFIBER and Agency of Noise. Her work has been performed and exhibited both internationally and in the UK and Ireland, in galleries, museums, theatres, and performances spaces, including:

Her work has also been included and commissioned for festivals including:

She has curated performances and talks, as Agency of Noise, which include The Prophetic Sound, Cavendish Ballroom, London, 2013, and Squirmish at the Oasis at Kingsgate Trust, London in association with Camden Arts Centre, 2013.

As an educator, Christine is committed to engaging students through research-led teaching. This includes leading workshops in sound and performance as well as inviting students to collaborate and perform at public events (South Street Arts Centre, Reading July 2018, Iklectik Art Lab, London September 2018).

In 2016, she developed a body of work through performance workshops with students from Reading School of Art and Edinburgh College of Art. This work entitled 'WORKSHOP' was presented at Art Lacuna Gallery (July, 2016) and published as a photo essay in Visual Culture in Britain (Volume 18, 2017).

- New Spaces For Music, curated event for the performance of sound works in alternative spaces across Dublin City. October 2009