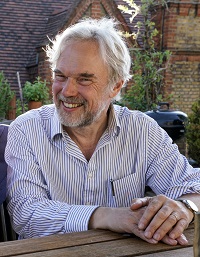 I retired from the University and became an Emeritus Professor on 1 September 2015. I remain active in academic research and writing from my home base in France.

I have worked and published extensively in English and French on the Allied bombing of France between 1940 and 1945 (see my France under Allied Air Attack website). France took the equivalent (in tonnage of bombs) of nearly eight Blitzes from British and American bombers, and suffered over 57,000 dead in this period; my primary interest has been to find out why the Allies undertook these raids and how the French, the Vichy state and the Resistance responded. As well as publications in print, this work has fed into five French TV documentaries, on the bombing of France as a whole and of four selected cities – Nantes, Le Havre, Rouen and Royan. In addition, my interest in the varied national and regional memories of Europe’s bombing war has led to two substantial articles, one of which was published in 2017.

In November 2020, I published a medium-length biography of General de Gaulle, just in time for the fiftieth anniversary of his death.

I have supervised four students to successful Ph.Ds, and am available for informal consultations (at a distance) from Ph.D. students, and to invitations to act as an external examiner in my areas of interest. I am equally open to invitations to talk and write.

Before retiring I took part in a major AHRC-funded joint research project on Bombing, States and Peoples in Western Europe, 1940-45, covering the effects of Allied bombing on French civilians and the reactions of the Vichy state and the Free French.
I was also part of the Reading-based 'Liberal Way of War' programme, funded by the Leverhulme Trust and co-edited, with Professor Hilary Footitt, a study of Liberal Democracies at War and how they represent conflict to their citizens (2013).

I have taught in Isfahan, Iran, at the Le Havre Business School, and at two different universities in Paris, as well as working for Oxford University Press, before being appointed to the Department of French Studies (now part of the Department of Languages and Cultures) at Reading in 1990.

I served as a member of the Franco-British Council from 2006 to 2012 and on the Council of the Centre d'études sur la vie politique française (CEVIPOF) from 2008 to 2012. I became an Officier dans l'Ordre des Palmes Académiques in 2010.

I am a member of the French Air and Space Academy and of the Conseil Scientifique of the Fondation Charles de Gaulle.