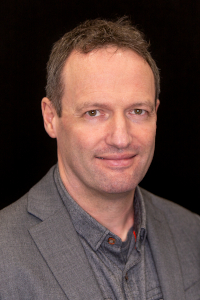 Oliver is an architect, mapmaker and urban endurance walker. He qualified at PCL London, has worked at award-winning London practices Wolff Olins, Powell Moya and Eric Parry Architects, and has taught at Nottingham University, Cambridge University and Canterbury School of Architecture prior to joining the University of Reading team.

He worked initially as an architect and designer at identity agency Wolff Olins on projects for the Natural History Museum, Toshiba and the Welcome Foundation, before joining Powell Moya as an interior designer and subsequently as project architect on the £20m Cambridge Regional College. Oliver also designed and detailed the complex interior conversion of Westbourne Grove Church, creating a new church within the old, in Notting Hill as part of an £11m project for the Manhattan Loft Corporation. During this time Oliver was first prizewinner in a series of open competitions, including the Observer Liberty Woolmark furniture competition, Restaurant 2000 competition and BD Hot Desking competition, and runner up in the RIBA Living Sites Competition, Circle 33 Housing Competition and Europan 5 in Turku Finland. These projects were the subject of an exhibition at the Architecture Foundation 'Mars Pants' and its related publication.

Oliver began teaching at Cardiff Institute before progressing to run Diploma Studio at Nottingham, becoming Tripos Studio Master at Cambridge and subsequently Course Leader at Canterbury School of Architecture, UCA. Under his leadership CSA rose from 38th place in the Guardian Table for Schools of Architecture to 5th place in 2016.

As map maker, public space researcher and activist, Oliver has focused on minor public spaces in London creating a survey and exhibition of benchspaces between Westminster and Leamouth with designer Daisy Ginsberg, a circular walk workshop with fourteen contributing teams in Southwark, a walk with photographer Emmanuelle Waeckerle from Highgate to Battersea and the Lea Valley Drift maps for London Legacy with architect Chloe Street. He was commissioned by the Design Museum and Kensington Palace to create the Power and Wealth walks to help initiate collaborations between the two neighbours in 2015. Currently Oliver is developing his PhD in Urban Mapmaking at Reading, his paper on the Lea Valley Drift project was published in ARQ.

Oliver uses an issue-based approach with students of architecture and creates links between fieldwork, action, proposition, realisation and impact analysis. Locating extraordinary situations across Europe and utilising these as catalysts to student thinking has been a feature of the briefs for final degree projects that he creates. For example, ethnic integration in Marseille, flood defence in Hamburg, post-Olympic conditions in Athens and gentrification conflicts along the High Line in New York.