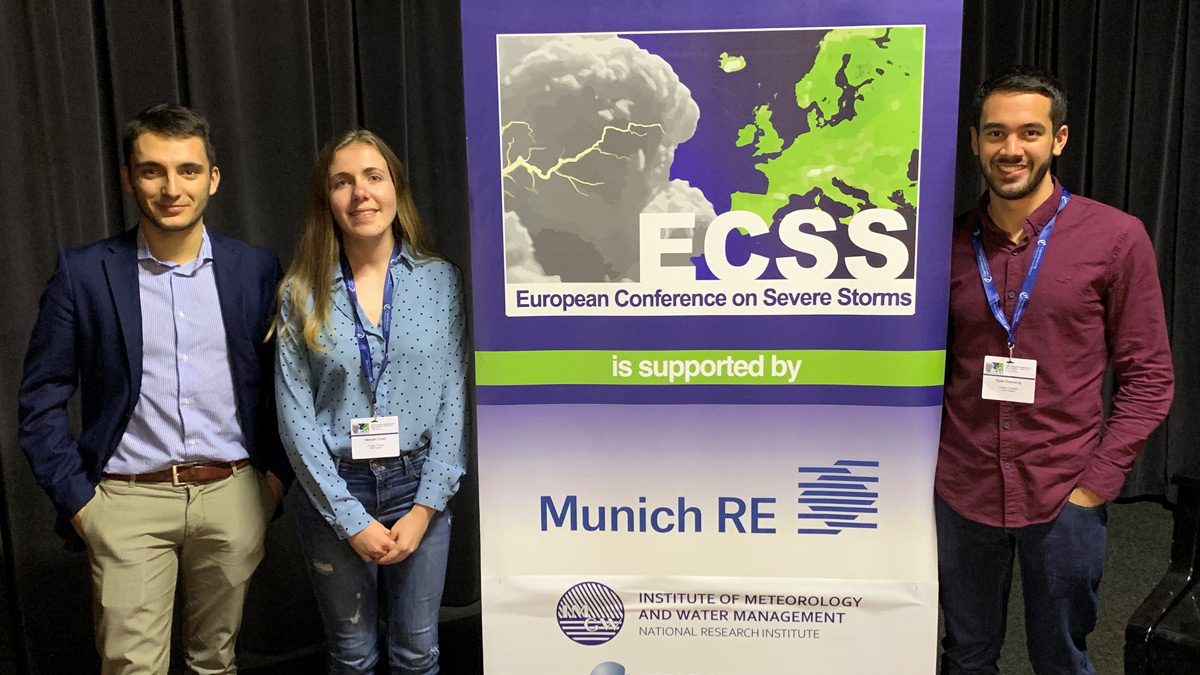 "The amount of research going on and the staff-student ratio was something that really drew me in."

Francesco's decision to come to Reading from Italy was helped when searching for options online: "I saw that Reading is voted one of the best Meteorology departments in Europe for research."

Today, the students are very much a part of a thriving research culture that characterises the Department, having excelled in a group research project taken during their third year spent abroad, studying at the University of Oklahoma.

This led to the trio, now in the final year of their MMet Meteorology and Climate course, having their group research project promoted at meteorology conferences across the world, including the USA and Italy.

They were also able to attend the 2019 European Conference on Severe Storms (ECSS) in Kraków, Poland – with the Department assisting the funding of travel and accommodation expenses.

The momentum of this research continued into 2020 as it was presented at the American Meteorological Society (AMS) annual meeting in Boston by one of the groups supervisors, Dr Elinor Martin.

During their year in Oklahoma the students had the chance to study severe weather systems up close while gaining wide-ranging meteorology experience and life-skills.

The Department of Meteorology at Reading has an established relationship with the University of Oklahoma, located in the heart of tornado alley, which provides students the chance to benefit from new perspectives and experience types of weather rarely seen in the UK.

For Ryan, the year in Oklahoma offered the opportunity to learn a different side of meteorology: "In Oklahoma they do a lot of research in severe weather. We were studying in the National Weather Centre where the storm prediction centre is, where the forecasts are made and warnings given."

Read the University of Oklahoma's story on the students

In addition to the fantastic learning opportunities given by studying abroad, Francesco enjoyed "meeting different people from different cultures from all over the world", which Ryan adds helped him to become "more adaptive and flexible."

For Hannah studying abroad "was a bit of a shock at first, but so worth it. I learnt so much with some really good classes."

"It's a great experience, and when you get the opportunity it's too good to turn down. It's tough, but you learn a lot and it helps you come back as a better meteorologist."

Hannah, Ryan and Francesco took on a group research project module called "Capstone" in their second term studying in Oklahoma. Here they constructed a four-year climatology of high shear-low CAPE (convective available potential energy) environments, also known as HSLC environments across Europe and the US.

After presenting to their fellow students and academics in the National Weather Centre, one of their supervisors, Dr Harold Brooks, submitted the research to the ECSS.

The ECSS brings together the international scientific community to exchange knowledge on new developments in severe storm research, and the trio were invited to have their findings presented in this international arena – something Ryan hails as "the cherry on the cake."

Francesco is hugely proud of this recognition: "It was the best thing we've ever done. It was a great opportunity to get inside the world of research, come up with your own ideas and methods and work with a group."

The research experience gained in this joint project is also something that Hannah sees as good preparation for the final year dissertation.

Attending the five-day conference offered the Reading students unprecedented access to leading researchers in the field.

"We attended talks, networked, heard from lots of different people from different countries. There were around 140 people and over 20 countries around."

"We saw some University of Reading alumni presenting at the conference, which was quite inspiring."

All are considering continuing their research following completion of their MMet degree. "It is being part of something very active and impactful in the world of research. It's inspiring to see what is going on and makes you think that one day you'll be able to contribute to that as well," says Francesco.

Ryan is also aware of the benefits of studying Meteorology at Reading: "you're learning from the best in the field, people who are doing that cutting-edge research and passing that on to you first-hand."

Read about our BSc Meteorology and Climate course

Explore our research in the Department of Meteorology