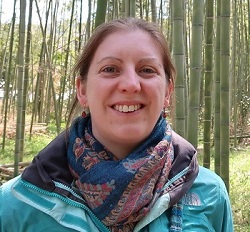 Institution-Wide Language Programme within the Department of Languages and Cultures.

I grew up in Reading and studied English and German in Nottingham, which gave me the opportunity to spend a year abroad in Tübingen, in the South of Germany, as an Erasmus student and Language Assistant in a Kindergarten.

I enjoyed my Year Abroad in Tübingen so much that directly after graduating, I went back to this picturesque university town and lived there for a further four years, mainly teaching English as a Foreign Language to German adults and university seminars in Old and Middle English. I also worked as a proof-reader of academic articles and a translator. All this gave me a fantastic insight into the differences between English and German and the ways in which languages can be taught and learnt.

In 2012, I began working at the University of Reading on the Pre-sessional English programme in ISLI, and was delighted when the opportunity arose in 2013 to combine this with teaching German on the Institution-Wide Language Programme.

I now enjoy teaching German to Beginners and Intermediate students on the IWLP, and academic and general English in ISLI to visiting students spending their Year Abroad in Reading.