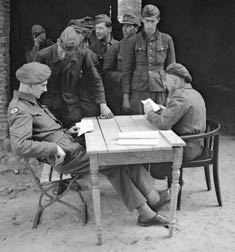 Wars are often encounters between speakers of different languages. In these encounters, there is on the one hand , a public policy dimension, setting frameworks and expectations, andon the other hand,the lived experience of those 'on the ground', working with and meeting speakers of other languages. Government, the military, and multilateral agencies develop language policies intended to prepare their soldiers to work with foreign allies, meet foreign ene mies and deal with civilians who do not speak their language. In the context of armed conflict, soldiers experience the reality of these language encounters at first hand.

Languages at war: policies and practices of language contacts in conflict seeks to test the theoretical frameworks set by language policies for war against the experiences of those at the sharp end of conflict. 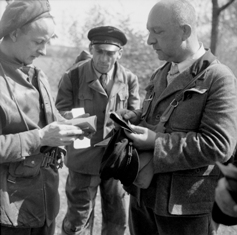 The project takes a comparative approach to the task, analysing two related but contrasting case-studies, one on liberation/occupation (Western Europe, 1944-47), based at Reading, and one on peacekeeping ( Bosnia, 1995-1998), based at Southampton. Both case-studies concern twentieth century joint Allied intervention in continental Europe, but are different in two important respects.

Firstly, the nature of the command structure is different in each: in the case of Europe in 1944-47, allied commande rs worked together, but operated in separate theatres of war, whereas in Bosnia, troops were deployed in a multilateral integrated command force.

Secondly, the missions in the two case-studies pose contrasting sorts of language encounter: the first positions troops as liberators and occupiers, the second places them as peacekeepers between blocs of opposing enemies.

The Languages at War Network.

We Have now set up a new LAW Network on the Social Media Site 'Facebook'.

More information on the Network can be found on our News and Events page.