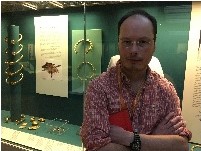 Michael Lewis is the Head of the Portable Antiquities Scheme – established to record archaeological finds discovered by the public in England and Wales – and a founding member of the European Public Finds Recording Network (2016 to present).

For five years (2012-17) he was a Special Constable with the Metropolitan Police Art & Antiques Unit, and maintains an active interest in law enforcement in relation to heritage crime. He is a member of the National Police Chief’s Council Heritage & Cultural Property Crime Working Group (2013 to present), and an advisory member of the All Party Parliamentary Archaeology Group (2003 to present).

Michael has written widely on medieval material culture – specifically metal small finds – and the Bayeux Tapestry. The latter was the subject of his PhD. He was also co-curator of the British Museum's international touring exhibition, Medieval Europe 400-1500 (2015-18), and is a member of the Comité scientifique Tapisserie de Bayeux (2013 to present), advising Bayeux Museum on the redisplay and reinterpretation of the embroidery.