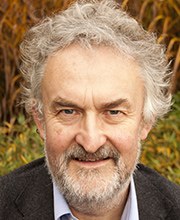 Martin is keen to discuss proposals for postgraduate research in geoarchaeology, prehistoric coastal archaeology, snail analysis in archaeology and experimental archaeology (particularly formation processes and the role of science in heritage outreach sites).

Martin's research concerns the contribution which archaeology makes to an understanding of environmental change on a wide range of timescales. Analytically he is interested in the analysis of soils, sediments and molluscs, land and marine. Topics include the prehistory of soil erosion, experimental archaeology and particularly coastal environments. Coastal research has focused on an extensive programme of fieldwork and excavations in the Severn Estuary where he has been working since 1983. This has particularly involved major excavations at Brean Down, Goldcliff and Redwick. Discoveries at these sites include several Mesolithic settlements and human and animal footprints, and many Bronze Age and Iron Age buildings and wood structures such as trackways and fish traps.

Current fieldwork projects include the Peterstone palaeochannels project in the Severn Estuary (with Dr Alex Brown), investigations at various experimental archaeology sites including Butser Ancient Farm and St Fagans, National History Museum Wales, as part of the Developing Experimental Approaches in Archaeology Project. He is also involved in a project on in situ monitoring of wetland sites in the Somerset Levels and a cave excavation at Taforalt, Morocco (with Professor Nick Barton, Oxford).