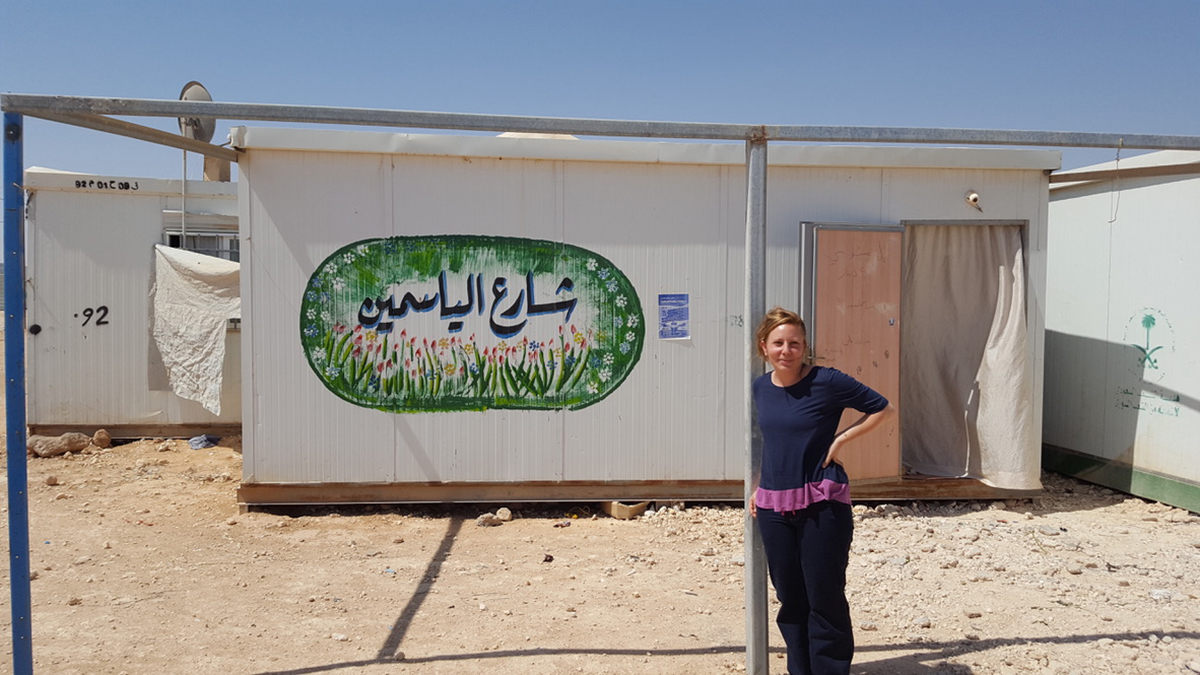 "I was in a library in Oxford when I was a PhD student, reading poems and trying to think about what they meant, and it occurred to me that the person whose work I was reading was alive – and so why don’t I just ask him? That started the process of embedding interviews into my research and feeling like the contemporary was a really exciting field because the ground was ever-shifting. "

Dr Yasmine Shamma teaches in the Department of English Literature at both undergraduate and postgraduate level. She specialises in 20th–21st century literatures, offering modules and seminars on poetry, Women's Literature, American Literature, and Postcolonial Literature and is published on these topics.

Yasmine is interested in questions of home, space, place, ecoglobalism, feminism, and form. Everything that she teaches is informed by her research, which tends to focus on the poetry of place, and ranges across regions - from New York City to refugee camps.

What connects them is her interest in space – the literary shapes of things, and marginalised voices talking about home:

I talk to refugees about home, about how they nest, what they need in a space to feel at home and that’s something that poetry does particularly well. A poem after all is made up of stanzas and ‘stanzas’ etymologically means ‘rooms’. Poems are ‘houses’ in that way. Poems house feelings; poems house ideas.

Yasmine teaches a variety of different modules and the benefit for her students is that her research feeds into daily teaching. For example, she invites students along to events and talks that she organises such as international symposia on the New York School, and she brings into class discussion the outcome of her interviews and up–to–the–moment conversations that she has with key literary figures, for example, Anne Waldman.

One feature of the Department of English Literature is the wide choice of modules. Of those that Yasmine teaches, she cites two as being particularly popular with students:

As well as research and teaching, Yasmine has initiated projects researching the refugee experience through oral testimony and creative writing:

Yasmine has been visiting refugee camps since 2016 and when the pandemic subsides she will start travelling again to offer Poetry Sanctuary workshops to refugees in the camps.

The benefits of creative workshops

When asked how the local refugee community or wider world will benefit by the delivery of these workshops, Yasmine replied:

"I am hoping to shift public opinion. That’s my ultimate end goal with my work on refugees and migration to sympathise western audiences to the plight of the refugee as one of perpetual displacement.

"It’s often easy when you see the news or pictures in newspapers to think of migration as an ‘event’, but it’s actually a ‘structure’ and it pervades the displaced person’s life, and those of generations that come after.

People view refugees often as number problems: ‘How will we accommodate 20,000 new refugees into the UK?’, for example. They are more than numbers: they are human beings."

Read more about Yasmine in her staff profile

Find out about our postgraduate courses

Yasmine also teaches on the Department of Languages and Cultures MA Migration and Intercultural Studies.