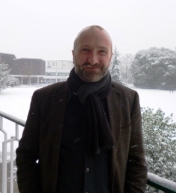 I am particularly interested in ways in which ideas of agency and responsibility shape, and are shaped by, literary form and aesthetics. My recent work on the figure of the sleepwalker - someone who does things without conscious decision - examines these questions with regard to a number of topics, including the narrative role of servants in the nineteenth century, the spectres of history in W.G. Sebald, and the role of the culture critic as opponent of totalitarianism in the 1930s.

My work is interdisciplinary, examining the meeting points of science (mainly physiology), social science, and literature. It also has a strong comparative element, dealing with French and German, and to a lesser extent Italian and Spanish, letters.

I have supervised three PhD theses to successful completion.

I would welcome enquiries from potential doctoral students in any area of nineteenth-or twentieth-century literature, particularly relating to ideas and problems of modernity, politics, and agency; and dealing with literary theory, especially Derrida. I would also be interested in projects with a comparative element, particularly relating to twentieth-century European literature.

I have contributed to courses in: