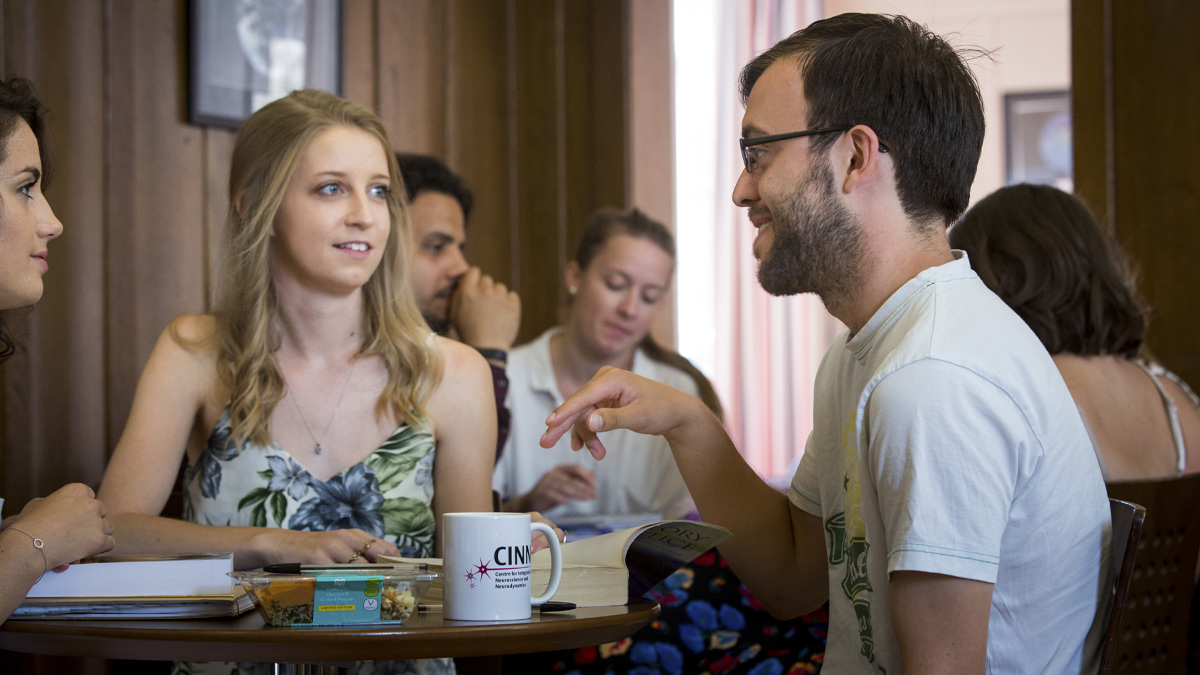 Supervisors: John Preston and Peter Scarfe (Psychology)
Sarah is a PhD student working on affective empathy in relation to virtual reality. Her research interests also include emotions and rationality, phenomenology, sensory perception and virtual realism. Her research is fully funded by the Consulate of Algeria.

Supervisors: Severin Schroeder and Max De Gaynesford
Sam is a PhD student who is working on necessity as found in mathematics, logic and conceptual truths. His main interests are the philosophy of Wittgenstein, Kant, moral and political philosophy. Sam graduated from Oxford's BPhil in 2018, having written a thesis on realism and idealism in Wittgenstein's later philosophy.

Supervisors: Brad Hooker, Philip Stratton-Lake & Jonathan Way (Southampton)
Email: James.Hart@pgr.reading.ac.uk
Personal Website: James-Hart.org
James is an AHRC-funded PhD student working in ethics and political philosophy. His research is on non-additive approaches to moral aggregation with a special focus on how to distribute healthcare resources. He received his MA in Philosophy from King's College London and his BA in Philosophy, Politics and Economics from Reading. James also receives coaching from Effective Thesis.

Supervisors: Brad Hooker and Luke Elson
David is a part-time PhD student working on aspects of the ontology and moral standing of business corporations. He is a mature student having recently retired from a 38 year career in academic and commercial scientific research and professional communication in the Life Sciences.

My doctoral thesis concerns capturing moral universality which involves evaluating metaethical positions that span across various traditions in philosophy such as Kantianism and Humeanism.  My interest in metaethics has grew from a long-lasting influence by Plato's republic and in particular, a system-building approach to philosophy. As such, my interests span from metaphysics to the philosophy of Art. I received my BA and MA from The University of Sheffield, writing my MA dissertation on ethical intuitionism.

Supervisor: David Oderberg
Ross is a PhD student who is working in the field of virtue ethics, specifically in its relation to ethical naturalism. His other areas of academic interest include the philosophy of religion and political philosophy.

Supervisors: Max De Gaynesford and Severin Schroeder
A Hong Kong-based poet and painter, Paul is writing a PhD thesis on truth and literature. He received his PhD in Chinese literature from the University of Edinburgh, as well as a few MA/MSc degrees from various universities around the world.
Try google "econpoetic" for more of his footprints...

Supervisors: David Oderberg and Max de Gaynesford
Email: m.j.norris@pgr.reading.ac.uk
Personal website: matthewjamesnorris.weebly.com
Matthew is a UoR-funded PhD student working in philosophy of religion, metaphysics, and epistemology. His doctoral thesis concern the compatibility of divine foreknowledge and creaturely freedom, particularly in the context of a holochronically timeless account of God's being, and pays special attention to the work of Thomas Aquinas and Luis de Molina. He received his MPhil in Early Modern History at the University of Cambridge and a BA in History and Philosophy at the University of Reading.

Supervisors: Emma Borg and Dimitrios Kyritsis (Law)
Marat is an AHRC-funded PhD student who is working on philosophical and linguistic aspects of legal language. He received his Master's degree from Radboud University Nijmegen and his Bachelor's degree from Heinrich-Heine-University Dusseldorf.

Supervisor: Severin Schroeder
Personal website: harrytalboys.academia.edu/
Harry is a PhD student who has completed a Ba and an MA at the University Of Sussex, and an MRes at the University Of Reading. He is mainly interested in continental philosophy, but also Wittgenstein and the philosophy of language. Harry is writing his PhD on Schopenhauer and aesthetics.

Supervisors: Severin Schroeder and John Preston
Harry is a PhD student whose main interests are Wittgenstein and the history of analytic philosophy. His thesis is on Wittgenstein's intermediate period, with an emphasis on his philosophy of mathematics. He has also done work on both Bertrand Russell and Friedrich Waismann, and in the area of philosophy of psychology.

Supervisors: Brad Hooker and Philip Stratton-Lake
Personal website: sites.google.com/view/stevendwu
Steven is a PhD student who works in value theory and normative ethics, with interests in political philosophy and philosophy of criminal law. His PhD thesis concerns social justice, blame and desert (moral and economic). He received his MRes from Reading, his MA in Teaching from Tufts and his BA from New York University.

Supervisors: Emma Borg and Nat Hansen
Personal website: sites.google.com/view/sarahafisher
Sarah  works on topics in the philosophy of language and mind. Her PhD thesis concerned linguistic framing effects and the role of context in meaning and interpretation.

Supervisors: Brad Hooker and Luke Elson
Bradley works on the ethics of our treatment of refugees and has taken a Teaching Fellowship at Durham University.

Supervisors: John Preston and Max De Gaynesford
Zachary is a PhD student with interests in a variety of sub-fields, who is working on conceptions of knowledge and objectivity. He received his BA in Philosophy and Linguistics from the University of Michigan, Ann Arbor; his PhD from the Catholic University of America; and two graduate theology degrees from the Pontifical Gregorian University. He is also a Catholic priest, of the diocese of Lansing, Michigan.

Supervisors: David Oderberg and Luke Elson
Lanell researches in the areas of metaphysics, philosophy of mind, and moral epistemology. Her doctoral thesis concerned the phenomenal perception of moral properties and defining the metaphysical features of a moral agent.

Supervisors: Emma Borg and William E. S. McNeill (Southampton)
E-mail address: a.scarafone@pgr.reading.ac.uk
Antonio is an AHRC-funded PhD student who works on topics at the crossroads between philosophy of psychology and developmental psychology. His PhD thesis concerns the development of social cognition and communicative abilities in early infancy.