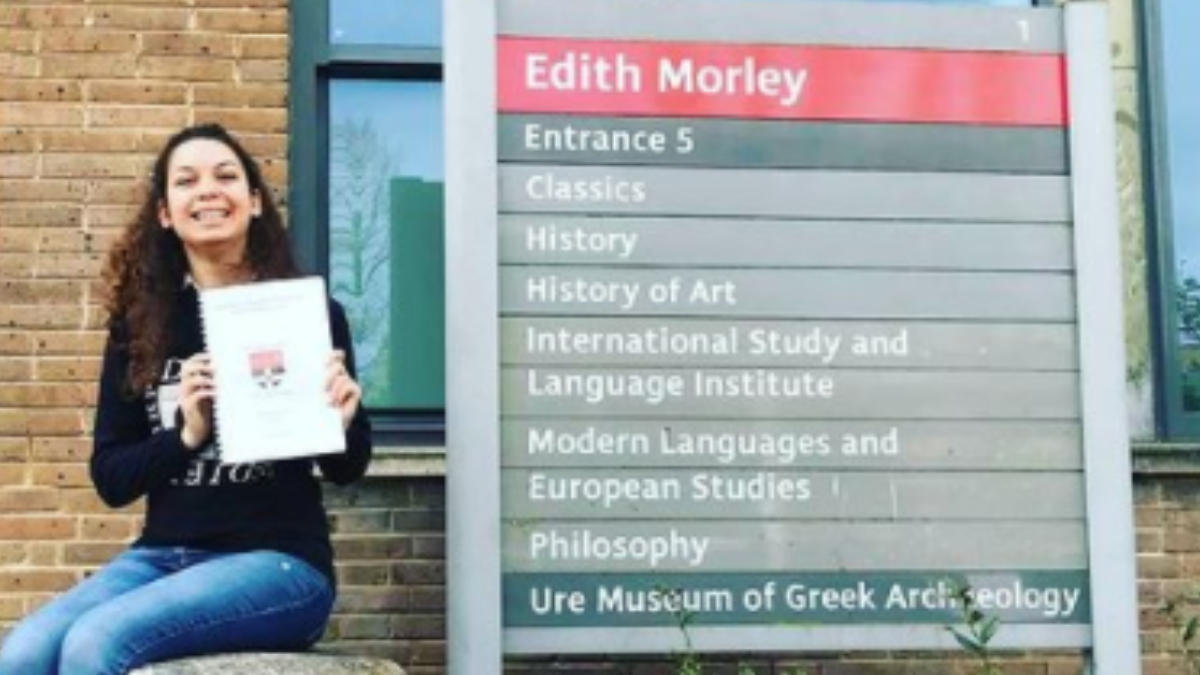 Rebeca grew up fascinated by Greek myths such as Hades and Persephone, and linked her school subjects to the classical world wherever she could. Rebeca came to the University of Reading to follow her passion and threw herself into university life with enthusiasm.

Rebeca took advantage of the work experience opportunities offered at Reading, including the Academic Placement and working at the Ure Museum.

"I did the Academic Placement over the summer, between my first and second year of study. I worked closely with an academic who was piecing together classical images that were used during the suffragette movement, culminating in an exhibition. We looked at both positive and negative imagery, analysing what was relevant, seeking to understand the context, and separating the reality from the myth. I went to the British Library and accessed microfilms I wouldn't normally have been able to, and I learned a lot about women's rights.”

Having the Ure Museum as part of the Department of Classics was a game-changer for Rebeca.

“This was my first ever experience with object handling and it was done with excellent guidance. I became confident in my own abilities when it came to handling artefacts, and this gave me a good core understanding of archiving, materials used in the ancient world and the crafting techniques. I learnt how to store objects, catalogue them, and update the online systems so that everything was correctly logged.”

Rebeca enjoyed the welcoming atmosphere within the Department and joined the Classics Society during her time.

“I was the President of the Classics Society in my third year and the PR and Fundraiser in my second year. Both have helped me with public engagement when volunteering and helped me develop diplomacy, organisation, and leadership skills. These skills have come into play when working for the University of Reading after graduating. I took on an admin position for a year before starting my MA and often had to host events, write agendas and minutes, and organise travel bookings, catering for events ahead of them taking place.”

Progressing to the next level

The module structure for BA Ancient History was incredibly useful for her when interpreting objects from those eras during her postgraduate studies.

“This core understanding also helped me when I was completing some research into the eugenic representation of an object from Mephis which dated back to the Ptolemic era, as I had context to the Greek and Roman influence over Egypt during this time. This research was later added into an online exhibition."

The Ancient History degree has also made Rebeca a versatile writer.

“We were often given different assignments like essays and sometimes had to write blogs, articles, and create games inspired by different ancient sports and cultures, and that has helped me in my postgraduate years. I became a strong academic writer in my MA years which was largely due to the supportive feedback received when writing essays at Reading.”

Outside of academia, Rebeca has edited blogs for the University of Reading's Museum of English Rural Life, and written articles for museum newsletters.

“For example, I have recently been working on an article for BAFM (British Association for Friends of Museums) on Oscar Wilde and his legacy within Reading and relating this to the objects within Reading Museum. I'm also an ad-hoc Museum on Wheels volunteer with Reading Museum and help with setting up the event, object handling, engaging with the public and discussing Reading's local heritage.”

Rebeca is currently working part-time at the Museum of English Rural Life as part of the Front of House Team.

Recently, Rebeca signed up to the University’s Thrive Mentoring Scheme as a Careers Mentor for students.

“I'm honoured to have graduated from Reading and it is a privilege to still be involved with the Department of Classics as an alumni. I truly set my roots here and Classics at Reading has allowed me to become the person I am today.”