The Nutrition Group is named after the eminent scientist Professor Hugh Sinclair.

During 1995, the International Nutrition Federation, originally set up by Professor Hugh Sinclair, endowed the Department of Food Science and Technology (now the School of Food and Nutritional Sciences) at the University of Reading with the proceeds of his estate to set up a major centre for nutritional research. 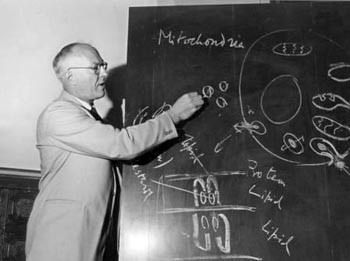 Hugh Macdonald Sinclair was born in 1910. He was educated at Winchester and Oriel College, Oxford where he excelled in his university studies in physiology and was considered a promising student. He continued his studies at University College Hospital and obtained his Oxford DM in 1939. Sinclair was elected as university demonstrator and lecturer in biochemistry at Oxford, and a fellow of Magdalen College, in 1937.

Sinclair was the Director of the Oxford Nutrition Survey (ONS) from 1942-1947. The ONS carried out surveys for the Government on a wide range of groups in the UK, such as pregnant women, students and manual workers. The surveys were used to help ensure that ration levels were sufficient for maintaining a healthy population. The ONS also carried out survey work in the British-occupied areas of Germany and The Netherlands after the war where the people were suffering from malnutrition. The ONS became the Laboratory of Human Nutrition (LHN) in 1946.

Sinclair was appointed Reader in Human Nutrition at Oxford in 1951. However, by this time the study of nutrition as a separate subject was not viewed by many in the medical profession or academia to be necessary; it was felt all significant research on the subject had already been done. Sinclair lost his position at Oxford in 1958.

Essential Fatty Acids and the International Institute of Human Nutrition

The loss of Sinclair's post was also a result of other factors. One was his interest in the relative deficiency of essential polyunsaturated fatty acids (EFAs) which he felt was the main cause of various 'diseases of civilisation', such as heart disease. In 1956, he wrote a long and controversial letter outlining his views to The Lancet (6 April 1956, 381). He was widely disagreed with. We now know that Sinclair was ahead of the times and take for granted that EFAs play an important role in human nutrition. Another factor was Sinclair's unfortunate manner of dealing with authority, something that many remember him for. Although he lost his readership, he remained a fellow at Magdalen.

Sinclair spent the next few years teaching abroad and raising money to set up an independent nutrition institute. Largely with independent means, he set up the International Institute of Human Nutrition (IIHN) in 1972 and spent the rest of his life trying to raise funds for what he saw as a key research institute for the study of nutrition. Sinclair continued to research the role of EFAs and particularly studied population groups such as Eskimos who had little instances of heart disease but a diet high in fat. His interest in this area had first occurred during the War when he visited Canada to assist the Air Force in investigating snow-blindness. He made his initial observations about the Eskimo population and their diet during his time in Canada and in 1976 when he gained funding to study Eskimos in Greenland.

In 1979, Sinclair set out to prove the importance of EFAs by living off of an Eskimo diet for 100 days. He ate only seal and fish and tested his blood clotting times. This self-experiment was controversial and he did not receive any external funding as no ethics committee would approve the diet. Sinclair believed that self-experimentation was key and that testing animals alone was not enough to further research on human nutrition. His results were never properly written up but he did find that his clotting time extended greatly.

No other major research was undertaken by Sinclair although much work was carried out at the IIHN. He sat on many committees, attended a great number of conferences, and advised on areas such as fluoridation of water and EFAs. He was a visiting lecturer at the University of Reading (1970-1980) and oversaw many students at Magdalen. By the 1970s his ideas on EFAs had become much more widely accepted, and the importance of his contribution acknowledged, which he greatly enjoyed. He is remembered for his contribution but also for his strong and eccentric character. He was intensely proud of his heritage and his home Lady Place, a mansion in Sutton Courtenay, where he entertained friends at his summer parties on the lawn. Whatever flaws there may have been in his character, no one could deny his dedication to the study of human nutrition, something he fought tirelessly for right up to his death in 1990.

His friend and colleague David Horrobin sums him up rather perfectly in the foreword to Jeannette Ewin's biography of Sinclair:

"He is not a household name. As a scientist and doctor he did not win any of the great prizes which can come to those who practise in these fields. Yet few who met him ever forgot him and he has left a legacy which, as the years pass, seems more and more important."