The University of Reading's Book of Hours 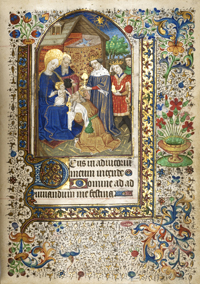 The University of Reading Special Collections holds a book of hours, catalogued as MS 2087, that was purchased in 1902 by Dr Nellie Eales, a lecturer in botany (one of the first women to qualify in the subject in the United Kingdom) who was intrigued by its flower borders. Every folio of the manuscript has a decorated border ornamented with precise if stylised depictions of flowers.

The Book of Hours was the subject of an online exhibition authored by Fiona Barnard in 2003 Download the PDF detailing the exhibition (pdf 586kb).

The book of hours has now been digitised and placed online using Virtual Vellum, with special thanks to Mike Meredith and Peter Ainsworth of the University of Sheffield.

This is an initiative of the GCMS, with financial support from the Pro-Vice-Chancellor for Research, Professor Christine Williams. Our thanks also go to Guy Baxter and to Caroline Benson of the University's Special Collections for their generous advice and support with this project. This site was created by Digital Development, under the guidance of Leigh Blount. The idea of digitising this manuscript was suggested by Hilary Chillman, a student on the MA in Medieval Studies (2011-12).

About the Book of Hours

See the description of the manuscript (by Delia Sarson)

The Book of Hours is one of many that were produced in Paris c.1410-25, for patrons who wished to follow the use of Paris. They all have the same French prayer cycle that had become standard as early as the 1350s, and that included The Fifteen Joys of the Virgin, a cycle of seven penitential prayers some times called the Seven Requests, and a short prayer to the True Cross.

There is an old edition of the complete text of the French prayer cycle, edited in 1862 by Casimir Chevalier from a later book of hours: 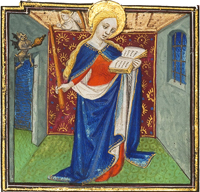 The calendar and litany of the Book of Hours contain the names of the major saints who were regularly invoked: Mary Magdalene, Margaret (invoked during childbirth), the Archangel Michael, and Saint Nicholas. The miniature depicting Saint Geneviève (pictured), the patron saint of Paris, has caught the attention of previous readers, as has the image of Saint Denis (also a patron of Paris and of the French king). Less well-known saints are associated with both Paris and its neighbouring regions, as well as Normandy, for example the twin brothers Gervasius and Protasius (Gervaise and Protaise) who were also patrons of the city of Milan, in Italy. Saint Fiacre (August 30th) is depicted in his role as the patron saint of gardeners, in a monk's habit and holding a spade. Fiacre was also the patron saint of the region of Brie in Normandy; his relics were preserved at the cathedral of Meaux.

On the last folio, another hand has added a prayer to Saint Adrian of Nicomedia, martyr and warrior saint. The cult of Saint Adrian was particularly strong in aristocratic Burgundian circles of the later fifteenth century; there was a popular pilgrimage to the abbey of Saint Peter at Geraardsbergen (Grammont). He was often invoked as a plague saint and as a guarantor against sudden death.

Such books of hours were a standard commission, and were probably moderately expensive, as can be seen in the famous Dunois Hours, commissioned by Charles Duke of Orléans for his half-brother, which may have cost six livres tournois in 1417 (see Albert Châtelet, "Les Heures de Dunois", Art de l'Enluminure, 25 (2008), p.15). Reading's Book of Hours has gilding and details that mark it out as an expensive but not exceptional commission. There are none of the additional birds, butterflies, animals or humans that were added in the borders to increase the prestige and value of a book. It may well be identified, in modern terminology, as an off-the-shelf purchase.

If you wish to understand more about books of hours, and to read their contents, see the following web resources:

Glenn Gunhouse, A Hypertext Book of Hours (Use of Rome, in English with Latin texts)