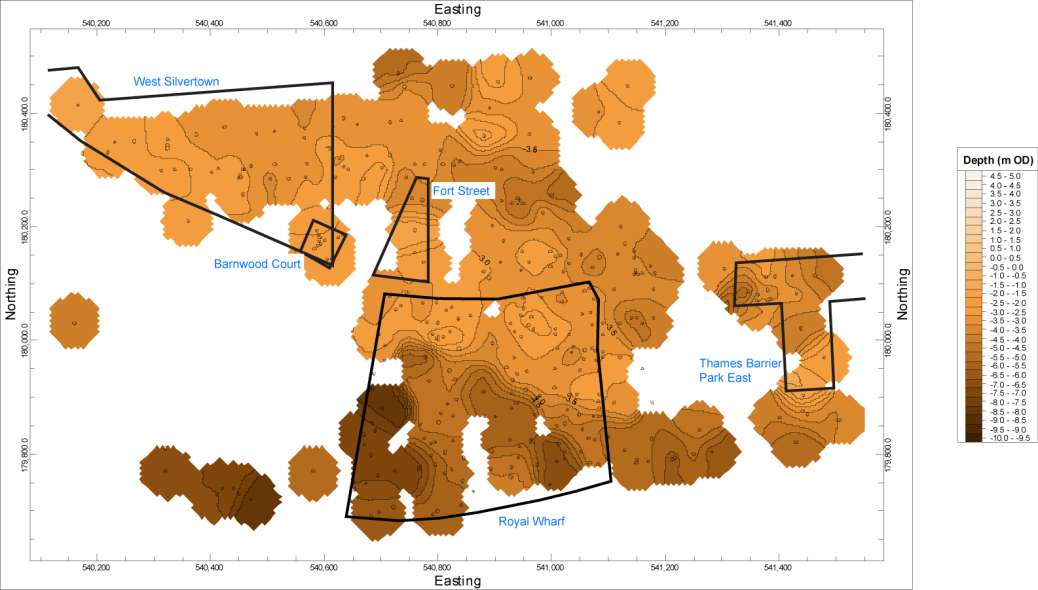 The Royal Wharf site is approximately 4 hectares in size, and lies on the south bank of the Lower Thames Valley floodplain, in the London Borough of Newham.

Quest was commissioned by CgMs Consulting to undertake geoarchaeological investigations in advance of development. The initial aim was to undertake a desk-based a deposit modelling exercise in order to map the former landscapes of the site, and to identify the sites palaeoenvironmental and archaeological potential. In order to achieve this aim, the major stratigraphic units were extracted from over 300 archived sequences in the nearby area, and 2-Dimensional topographic and surface models and borehole transects were produced using tailored geological software. Targeted geoarchaeological boreholes were subsequently put down with the aim of both ground-truthing and filling in voids in the deposit model, as well as collecting samples for potential further work.

The results concluded that the sediments beneath the site are quite different to those recorded during recent large-scale modelling exercises carried out in other parts of the Lower Thames Valley. They are therefore considered to make a valuable contribution to our knowledge and understanding of the evolution of the floodplain landscape along this stretch of the floodplain.

The work is currently being integrated into a paper focusing on the landscape evolution across large parts of the London Borough of Newham and Royal Borough of Greenwich (due to be completed in 2016).

'Quest have consistently shown themselves to be at the forefront of developing geo-archaeological investigation techniques and have a proven track record in delivering quality fieldwork and reporting to the highest standards.

'Our work together along the lower Thames has unlocked data on a sequence of past environments of regional to national importance.'