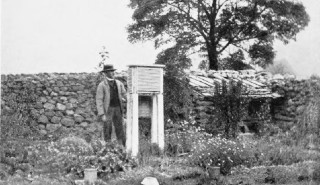 Record-breaking Victorian weather has been revealed after millions of archived rainfall records dating back nearly 200 years were rescued by thousands of volunteers during the first Covid-19 lockdown.

The Rainfall Rescue project was launched by the University of Reading in March 2020 and offered members of the public a way of distracting themselves from the pandemic by digitally transcribing 130 years’ worth of handwritten rainfall observations from across the UK and Ireland.

Some 16,000 volunteers responded to the challenge, digitising 5.2 million observations in just 16 days. Ahead of the two-year anniversary of the project launch, on Saturday 26 March, these records have now been made publicly available in the official Met Office national record, extending it back 26 years to 1836.

The volunteers’ efforts have revealed some new records for extreme dry and wet months across the UK, as well as providing more context around recent changes in rainfall due to human-caused climate change.

Professor Ed Hawkins, a climate scientist at the University of Reading and Rainfall Rescue project lead, said: “I am still blown away by the response this project got from the public. Transcribing the records required around 100 million keystrokes, yet what I thought would take several months was completed in a matter of days.

“Thanks to the hard work of the volunteers, we now have detailed accounts of the amount of rain that fell, back to 1836, as seen through the eyes of other dedicated volunteers from several generations ago. To put that in context, 1836 was the year Charles Darwin returned to the UK on the Beagle with Vice-Admiral Robert Fitzroy, and a year before Queen Victoria took to the throne.

“As well as being a fascinating glimpse into the past, the new data allows a longer and more detailed picture of variations in monthly rainfall, which will aid new scientific research two centuries on. It increases our understanding of weather extremes and flood risk across the UK and Ireland, and helps us better understand the long-term trends towards the dramatic changes we’re seeing today.”

Dr Mark McCarthy, head of the Met Office’s National Climate Information Centre, said: “The UK rainfall record is notoriously variable, with extremes of weather presenting us with drought and flood. The more we can shine a light into the earlier chapters and extremes within the rainfall record, the better we are able to understand the risks presented to us by climate change and future extreme weather events.” 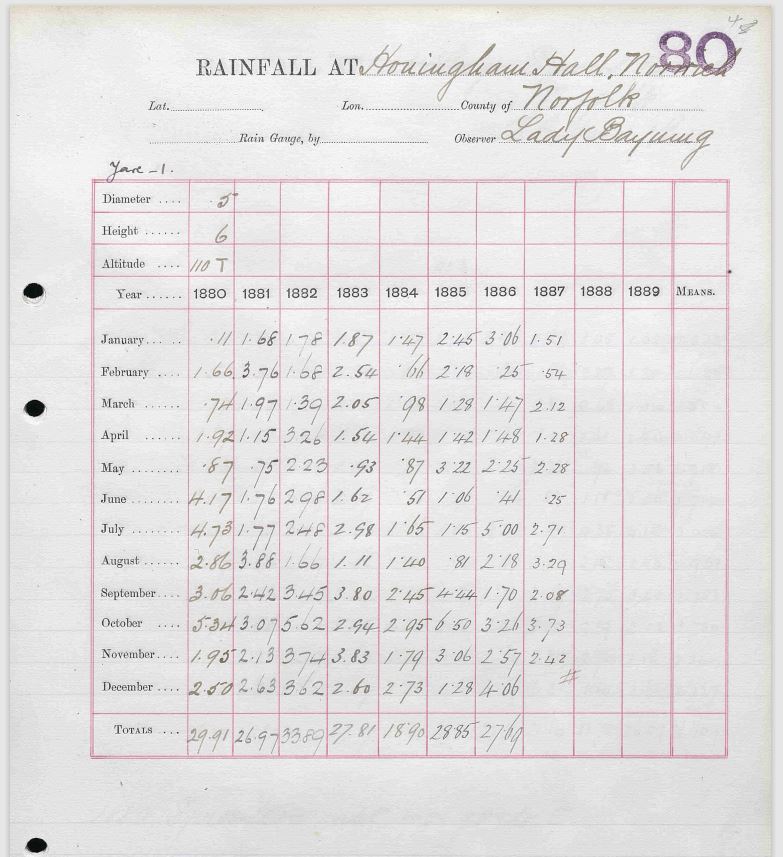 Paper records studied by Rainfall Rescue volunteers contained observations between 1677 and 1960, based on rain gauges located in almost every town and village across England and Wales.

Rainfall has been monitored systematically for the whole UK since the 1860s when George Symons established the British Rainfall Organisation to coordinate voluntary rainfall measuring activities, which later became a branch of the Met Office. However, the majority of the observations made in the pre-digital age, before 1960, have not previously been transcribed from the original paper records.

Each of the 65,000 pieces of paper held in the Met Office National Meteorological Archive showed monthly rainfall totals across a 10-year period and had been scanned during 2019. Many of the recordings were written in ornate handwriting, requiring human eyes to transcribe it.

The Met Office’s official UK rainfall series previously went back to 1862. Thanks to the Rainfall Rescue project, there is now around six times the previous amount of observational data for the years before 1960. The number of rain gauges contributing data to the national record for the year 1862 has increased from 19 to more than 700.

These earlier, detailed records could also help increase knowledge of the impact of how weather is affected by climate change not caused by humans.

After all the data had been transcribed, eight dedicated volunteers helped arrange the data into chronological sequences for each location. These eight volunteers are named as co-authors in a paper published today (Friday 25 March) in Geoscience Data Journal.

Some 3.3 million of the newly-transcribed observations have been processed by the Met Office and added to the publicly available national rainfall statistics on its website.

Catherine Ross, Met Office archivist, said: “This project has broken the definition of an archive. In its lifecycle a document moves from being a record, in everyday use, to an archive where it is kept as part of a memory – in our case the National Memory of the Weather.

“However, this project’s 66,000 formerly inanimate sheets of numbers have been given a new life by placing data that can be interrogated and compared into the hands of scientists at the Met Office and around the world.”

The volunteers who took part in the project expressed their admiration and thanks to the observers who creating the original detailed rainfall records, and to the British Rainfall Organisation for coordinating their work.

Jacqui Huntley, one of the eight Rainfall Rescue volunteers based near Stranraer in Scotland who worked across the whole project, said: “I got involved because I’m British and therefore a fanatic about the weather, especially rain. And it rains a lot where I live in Scotland. The data are obviously valuable to scientists, but I have also loved learning about the rainfall observers who were so dedicated in measuring the weather day after day. It has been fun, and a true team effort, from start to finish.”

A map showing the locations of all the rainfall gauges that contributed data to the Rainfall Rescue project can be found at public.flourish.studio/visualisation/5534063

The Rainfall Rescue project was carried out on Zooniverse, a platform for people-powered research. 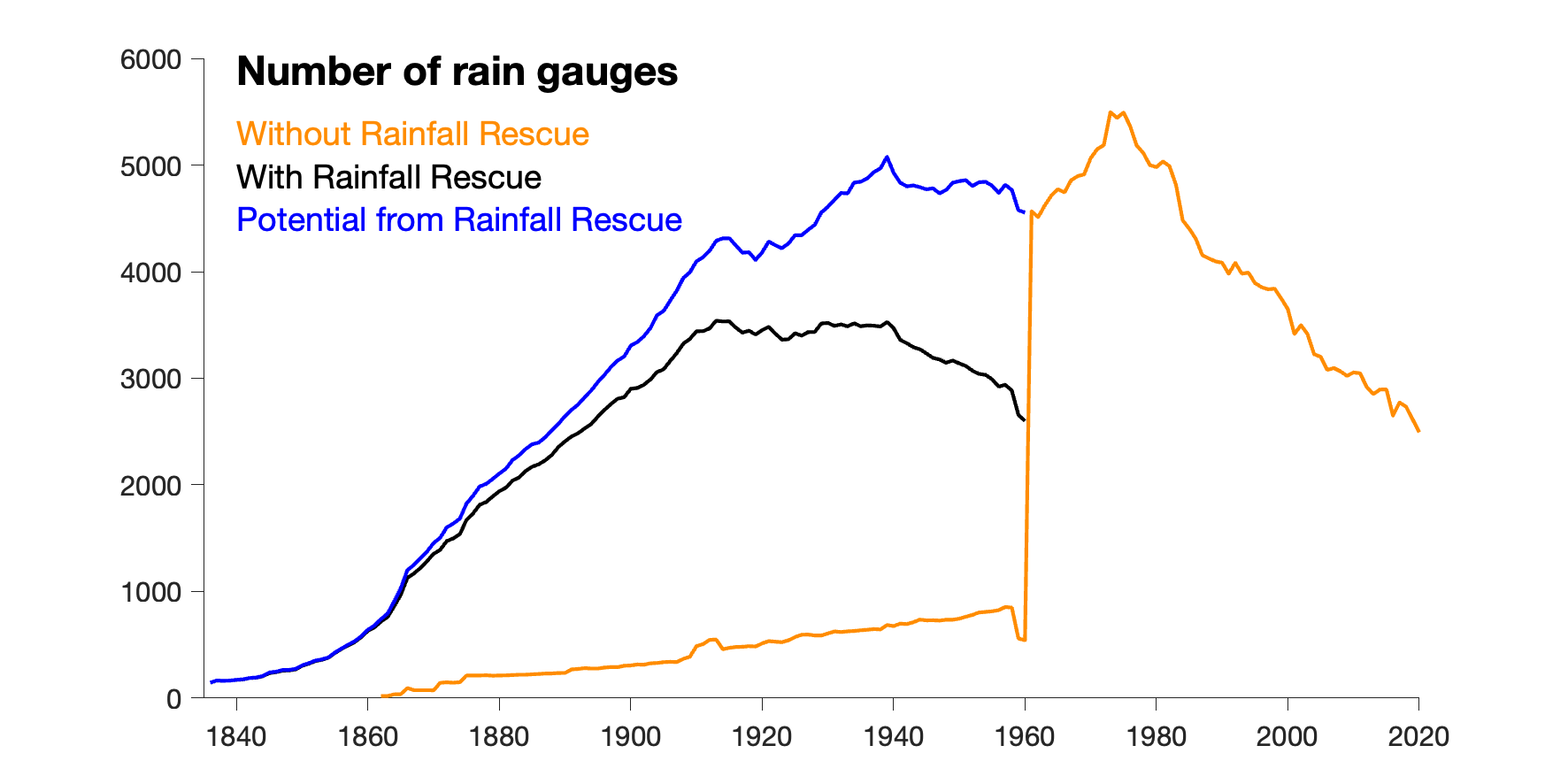