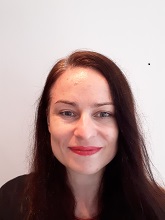 I am interested in the role that cultural products (literature, film, architectural landmarks) and the intertextual links between them play in the legitimation and subversion of inequalities - in particular, ethno-racial inequalities - in 20th and 21st-century Germany. I am currently completing my first monograph on eclectic intertextuality in the work of Turkish German author Yadé Kara and developing a second project on colonial-era landmarks in contemporary German culture.

I convene and teach on the modules:

In addition, I contribute towards the German language modules GM1L1, GM2L4, GM3L6, and the cross-listed film module ML1GEC (Greats of European Cinema).

To assist all students in reaching their potential (and having fun doing so!), I am committed to implementing creative and inclusive pedagogical practices and drawing on materials that reflect a diverse range of experiences and perspectives.

I am a member of a number of professional groups, including:

I am also a founding member of a new professional network, writing and reading group focused on diversity and decolonising German Studies in the UK and Ireland. Contact me for more information or to join the network.