An example of an idealised multilayer stack is shown in the following figure It consists of a total of m layers deposited upon a substrate which has a complex optical refractive index given by n5 = n5 - ik5. Each of the layers has a physical thickness (tm) and optical constants given by nm = nm - ikm, where nm is the dispersive refractive index and km is the dispersive extinction coefficient. The incident radiation has an angle (Φ) from a non-absorbing incident medium of refractive index (n0). If the layers are non-absorbing, the layer boundaries are parallel and the angle of refraction in the mth layer, θm, is determined from Snell's law. Each layer in the stack is therefore specified by three parameters, tm, nm and km. These quantities, along with n0, ns, and ks, specify the principal optical properties of the multilayer. With these quantities and angle of incidence the reflectance R and transmittance T of the multilayer can be calculated as a function of wavelength. 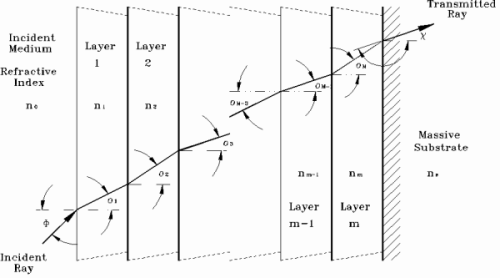 Nomenclature used for designating the thickness, refractive index, and angle of refraction for each layer in a multilayer stack

The phase of the mth layer is defined as δm = 2πσnmtm , where σ is the wavenumber of the incident radiation, σ = 1/λ. The wavenumber (cm-1) is proportional to the frequency of the radiation. In computing the spectral transmittance of a multilayer, the advantages in using this wavenumber scale are that many spectral transmittance profiles tend to have a even symmetry about some point when plotted on a frequency scale, whereas the profiles are quite asymmetrical when plotted versus wavelength. A further advantage of using frequency as the calculation variable is that often maxima and minima on a single film transmittance or reflectance curve are spaced at equal intervals on a frequency scale, whereas on a wavelength scale they are spread out to long wavelengths and compressed together in the short wavelength region.

When radiation is incident upon a multilayer at oblique incidence, both R and T must be computed separately in each plane of polarization. Rp, Tp in the p-plane of polarization, where the electric vector is parallel to the plane of incidence and Rs, Ts in the s-plane, where the electric vector is perpendicular to the plane of incidence. Generally, when unpolarized radiation is incident upon a multilayer at non-normal incidence, both the reflected and transmitted light becomes partially plane polarized. If the incident radiation is elliptically polarized, the degree of elliptical polarization of both the reflected and transmitted radiation is altered. This is because not only is the reflectance and transmittance different in the two planes, but also because the phase shift on reflectance is different for the two planes. If the radiation which is obliquely incident on a multilayer is initially unpolarized then the polarizing effect of the multilayer can be neglected and the average reflectance and average transmittance is the mean of the two polarizations (i.e. Rave = (Rp + Rs)/2 , and Tave = (Tp + Ts)/2).