When radiation originating in air (n=1) is incident on the surface of an optically transparent material, some of the radiation is reflected from the surface and some is transmitted into the material. The fraction of radiation reflected for the electric and magnetic fields is given by:

where, RE and RH are the fraction reflected of the electric and magnetic field vectors when the electric field is perpendicular to the incidence plane, and magnetic field is parallel to the incidence plane. θ is the angle of incidence (measured from the normal to the surface) and n is the refractive index of the material. For natural (unpolarized) radiation at normal incidence (θ=0), the fraction of radiation reflected is the mean of these two equations. This will determine the reflection from the front surface only. Before the radiation can exit from the opposite side, it undergoes a second reflection from the inside of the second surface boundary. This second surface reflection is further reflected back from the front surface again, producing multiple internal reflections. If these reflections are all added up, the total theoretical external transmittance (Tab) of a polished, uncoated, plane parallel substrate, in a transparent region remote from the materials absorption edges, and with no scattering within the material can be predicted from the real part of the refractive index (n) of the substrate.

The refractive index has also been characterised by an empirical relationship between the index of refraction and the energy gap of a semiconductor, known as the Moss rule,

where Eg = semiconductor bandgap energy derived from the cut-on position of the short wavelength absorption edge.

If no absorption losses are present in the substrate (k=0), and taking into account multiple internal reflections from both surfaces, the reflection coefficient is:

(i.e. k2 << (n-1)2), and where there exists no second surface for internal reflections, the value of the reflection coefficient from the incident surface reduces to:

Where losses occur during the propagation of a wave through the substrate, the imaginary part of the complex refractive index is added to the reflection coefficient as a frequency-independent measure of uniformly attenuated radiation.

Ra-=Energy reflected from the incident surface

Ta+=Transmitted energy through the incident surface

Tb+=Energy transmitted through the second surface

Tab=External transmittance observed through the substrate

Rab=Reflection coefficient of the substrate (1-Tab)

Where there are no absorption losses and using an incoherent source, the total reflectivity is the summation of the multiple internal reflection intensities from the front and rear surfaces. The following figure illustrates the relationship between the transmittance and reflectance of the front and rear surfaces and the total transmittance or reflectance of the substrate. 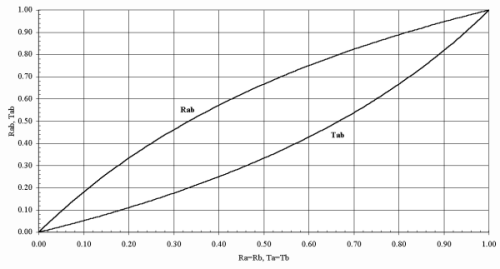