When a finite thickness substrate is viewed with wide-band uncollimated radiation, the multiple-beam interference created by reflectance deviations between the front and rear surfaces cancel, and the energy of the reflected beams can be summed. However, when a highly flat and parallel substrate is illuminated by quasi-monochromatic radiation, with a narrow frequency bandwidth from a scanning spectrometer, then the interference effects between the front and rear surfaces can be observed as a pattern of Fabry-Pérot fringes, known as a channel spectrum. This channel spectrum is superimposed on the spectral profile of the substrate, modulating its transmission as illustrated, under which circumstances the amplitude reflectances are required to be summed, taking into account the phase differences of the reflected beams. On a wavenumber scale, this channel spectrum will have a constant periodicity, with a fixed frequency interval, whilst on a wavelength scale the ripple frequency will decrease with increasing wavelength. 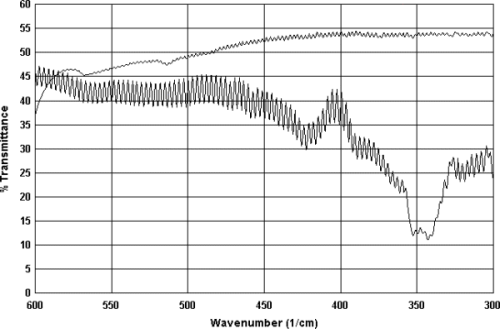 Liddel and Macleod derived the following coherent mathematical expression for determination of the total fringe amplitude which could be applied to highly collimated narrow bandwidth radiation with highly parallel thin substrates.

where δ is the thickness and Ψ reflection phase changes.

However, the practical implementation of this algorithm was considered by Liddel and Macleod to be a particularly complex problem to solve, as in order to estimate the total effect of this equation it must be integrated over the complete range of possible thickness variations within the substrate, over the range of wavelengths and angles of incidence defined by the bandwidth of the incident radiation and with the appropriately distributed weight proportion for each angle.

The combination of the reflected waves from the two surfaces can be considered similar to the principal of superposition which applies to all electromagnetic fields. This is defined as the total electric field created by different sources as being the summation of fields due to each source. The sources of two plane waves are mutually coherent between the two surfaces if the phase difference (Φ2 - Φ1) is constant. If the phase difference varies with time in a random manner , the sources of the two waves are mutually incoherent. The degree of mutual coherence is derived from time-averaged intensity distributions of the interference pattern formed by the two waves. If the two waves are mutually coherent (i.e. Φ2 = Φ1) the interference pattern is stationary with a spatial period given by;

where θ is the angle between the two wave vectors.