All of the exterior surfaces on the LDEF received direct solar illumination for periods of time during the mission. The cumulative times for the illumination of individual surfaces on the facility varied from 10-25% of the total mission lifetime. The amount of cumulated illumination time per orbit changed as the angle between the Sun's illumination vector and the plane of the LDEF orbit varied. 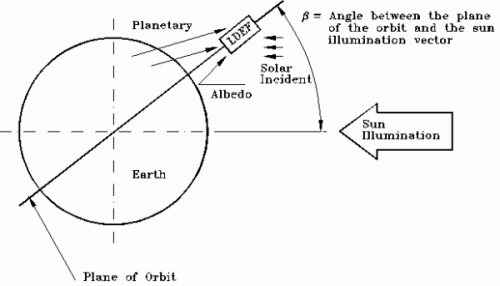 Figure 3, Variation of the Sun's illumination with the plane of the LDEF orbit

The rate of accumulation of solar exposure is calculated in terms of the equivalent number sun hours. This depends upon the solar form factor for direct solar radiation and upon the Earth's albedo form factor which is then combined with an appropriate value of albedo for reflected radiation from the Earth. The solar form factor for a surface on an orbiting spacecraft is a function of its orientation with respect to the Sun's rays. The Earth albedo form factor for a surface on a spacecraft is a function of the position of the spacecraft relative to the Earth's illuminated hemisphere and to the orientation of the surface with respect to the local vertical direction. Both form factors when averaged over a complete orbit are defined by the angle that the spacecraft's orbit plane makes with the Sun's rays and the orientation of the exposed surface with respect to the spacecraft's heading. The Earth albedo was determined from Nimbus 7 radiometer measurements reported by Smith et al. The solar exposure builds approximately linearly with time except for a visible modulation caused by seasonal variations. 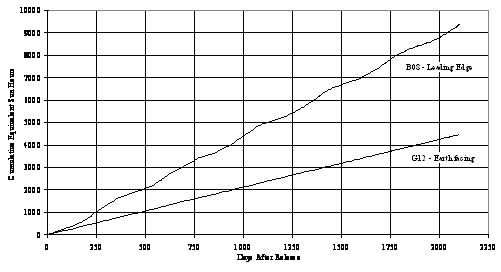 This accumulated exposure of solar radiation was one of the most important contributors to materials degradation on the LDEF. The following figures show the effects of this radiation on a As2S3 / KRS-5 coating deposited on a KRS-5 substrate from the leading edge tray B08, where gross discoloration and thermal blistering had destroyed the sample.