The variety of differing samples selected for inclusion on the two experiment locations were subdivided into three generic material types, viz:- uncoated crystal materials, "soft" multilayer coating / substrates and "hard" multilayer coating / substrates. By subdividing the samples by this criteria direct comparisons of spectral and physical assessments from equivalent exposed and control sample types could be made. Control specimens fabricated simultaneously with the exposed samples were retained under ambient laboratory temperature and humidity conditions to assess comparative changes of the two environments. Validating spectral changes which occurred as a direct result of the exposure to the space environment were only considered valid if they complied with the following criterion:

Spectral variations occurring from the experimental samples were considered to be unchanged, if as a result of the exposure, the following was found:

For each sample type, pre and post flight average transmission was calculated from coincident spectral regions. This enabled the changes which may have occurred in both the exposed and control samples to be quantified over the complete spectrum, and give an indication of the change in energy throughput of the components as a result of the exposure. Bandpass filter measurements were compared by measuring the centre wavenumber and 50% full width half-power points, and correlating the wavenumber displacement between pre and post flight measurements. All the spectral features were corrected for instrument wavenumber and transmission calibration prior to analysis.

Correlations of pre/post flight average transmissions, were analysed statistically to ensure both localised and wideband regions the changes were seen in the context of their equivalent samples. Statistical comparisons between pre and post flight data use the correlation coefficient (r), mean deviation and standard deviation (SD). The correlation coefficient (r) is defined as;

The size of the coefficient provides an indication of how well the pre and post flight data sets correspond, where;

Figure 16 shows the results of the pre-launch and post-recovery transmission correlation for these materials. The correlation of average transmittances from equivalent coincident spectral regions for the uncoated crystals gave a correlation coefficient (r) of 0.9962. The mean deviation, however, indicated a consistent loss in transmission of 0.765%, this was within the accuracy envelope permitted, inferring that no noticeable changes were observed. Controls for these crystals were unavailable. 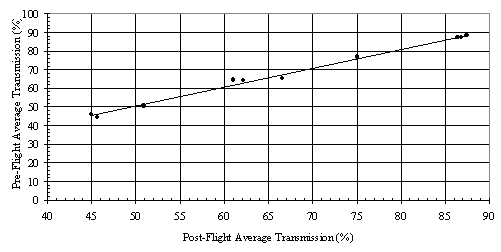 "Soft" multilayer coating and substrate materials principally comprised KRS 5 (TlBrI) based multilayer quarter wave stacks deposited on KRS 5 and KRS 6 (TlClBr) substrates. These were designed to utilize, by multilayer action, the long wavelength Reststrahl blocking properties of the materials. All of these components were originally fabricated for use in the Galileo-Jupiter probe.

The resulting structure produced a periodic highly transparent interference spectrum containing a reflection zone (notch) where the interference between layers add together to produce a region of destructive interference. The size of this zone being dependent upon the index contrast of the multilayer materials. This region is particularly sensitive to thickness, index or absorption changes in the structure. Figure 17 shows the results of the pre-launch and post-recovery transmission correlation for this group of filters. 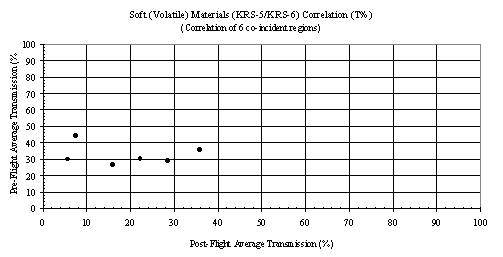 Comparisons of pre and post flight average transmittance were made between the soft (volatile) exposed samples from both sites, the correlation coefficient (r) was 0.168, indicating no correlation pre/post flight for these samples. This was also evident from visual inspections, where gross physical degradation / delamination of the coatings and substrate material was observed. Considerably less degradation in both spectral and physical properties was observed in samples located on the Earth-facing tray (G12) compared to equivalent samples located on the leading edge (B08). As a result of this experiment, the use of these materials in unprotected environments should be considered highly unsuitable in space borne IR instruments.

The selection of "hard" multilayer coating and substrate material flight specimens comprised spectrally selective filters from the following atmospheric remote sensing and weather forecasting satellite research projects; NIMBUS 4, 5, 6, 7, ITOS, TIROS N, PIONEER and GALILEO. The substrates were Ge, Al2O3, Si and ZnSe based with combinations of PbTe based multilayers in alternating combinations with ZnS and ZnSe or, in the case of Al2O3 and Si, with SiO. The multilayer structures were principally bandpass filters with differing numbers of cavities at various wavelengths between 4.4 and 15µm and bandwidths (FWHH) between 0.7 and 6%. Additionally there was an 8-12µm long-wave pass edge filter and two antireflection coatings at 4.4 and 10.6µm. The following design bandpass configurations were used:

Pre and post flight comparisons between the exposed and control hard multilayer coating / substrate materials produced an extremely good set of correlation data. The correlation coefficient obtained from 48 coincident spectral regions was very high at 0.9967 from the exposed samples compared with the equivalent control samples where a correlation coefficient of 0.9988 was obtained for comparisons between 19 similar coincident regions. These values verified the correlations made to be valid and well matched. The mean deviations obtained from the exposed and equivalent control samples were 1.376% and 1.302% respectively. This indicates a small consistent loss in transmission for both data sets but is still within the transmission budget defined for the measurement accuracy from the two spectrophotometers. These filters are therefore considered to be particularly stable with no degradation occurring as a result of the exposure. Figures 18 and 19 shows the results of the pre-launch and post-recovery transmission correlation for both the exposed and control samples for this group of filters. 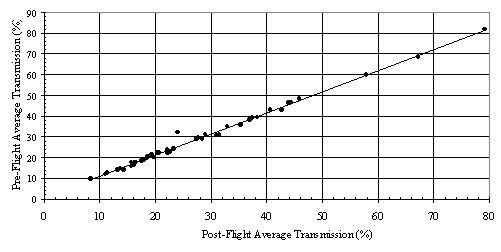 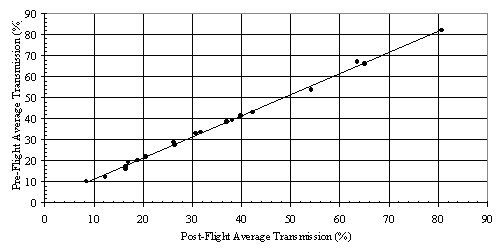 The uncoated materials average transmittance correlation was very high between pre- and post flight measurements. A consistent loss in transmission was indicated but this was sufficiently small within the transmission accuracy envelope permitted to infer no changes had occurred. Comparison of pre- and post-flight average transmittance values from the soft-coated materials produced a poor correlation indicating no correlation between pre- and post-flight sample spectra. This was also evident from visual inspections, where gross physical degradation of the coatings and substrate materials was evident, having occurred as a result of excess space exposure and the effects of atomic oxygen bombardment. Figure 20 and 21 show the effects of these changes on an uncoated sample of KRS-5 material. X-ray composition analysis on this sample showed that free thallium ions had disassociated and migrated to the surface (Figure 22) causing the material to become opaque. Post-flight visual and spectral analysis of these materials showed that less degradation had occurred in the Earth-facing tray (G12) than on the leading edge tray (B08). 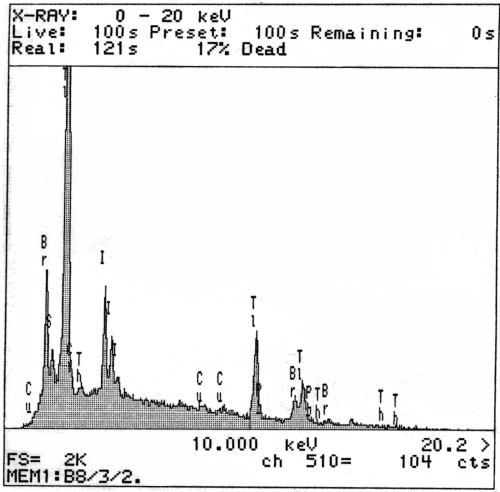 Figure 22, Post-Flight X-ray spectrum of KRS-5. Histograms show abundance of free thallium at the surface and indicate no other contamination materials

From the hard-coated (II-VI/PbTe based) materials flown, comparisons of pre- and post-flight average transmission were well correlated. They showed a small and consistent loss in transmission for both the exposed and control samples (~1.3%), but within the transmission envelope measurement accuracy of the spectrophotometers. These samples are considered stable, showing no degradation as a result of the exposure. A PbTe/ZnS-based sample was cleaned in 1,1,1-Trichloroethane and Propan-2-ol and re-measured. The spectrum remained unchanged indicating the surface was not contaminated during exposure to space.