Any spaceflight vehicle travelling in low Earth orbit will encounter meteoroids and orbital debris. Meteoroids are natural in origin, originating from comets or asteroids, whilst debris is the result of manmade materials remaining in the Earth orbit. Either object can pose serious damage to the vehicle and exposed surfaces. On the LDEF, the space facing experiment tray B08 provided some of the best examples of secondary ejecta from all of the impact sites recorded, and the various possible effects on a variety of different experimental samples. Several impacts occurred into the sides and edges of sample holders, leaving secondary ejecta spray patterns on the base plate, experiment samples and experiment-tray walls. Impacts into many of the coated specimens created deep well-like depressions in the centre of the impact feature with a highly-defined outer spallation zone. Although complete substrate cleavage occurred from an impact on the uncoated sample of calcium fluoride, most of the other impacts produced only localized coating delamination around the periphery of the impact site. One impact occurred into the side of the experiment base-plate (in the separation between the experiment base-plate and experiment-tray wall), creating an ejecta spray pattern onto the inside of the experiment-tray wall across from the crater. This crater is one of only a few found on LDEF which could be geometrically shown to have been produced by a highly oblique impact.

A total of 787 impact crater sites were recorded from the four experiments (S0001, A0056, A0147) contained in tray B08; approximately 26 of these sites being distributed over the surface area containing optical materials (Figure 23). The majority of the impact craters were found on the base-plate and sample holders were evenly distributed over the complete tray. In contrast, only one impact crater was found on samples from the Earth facing tray G12, with an estimated diameter of 0.5mm. 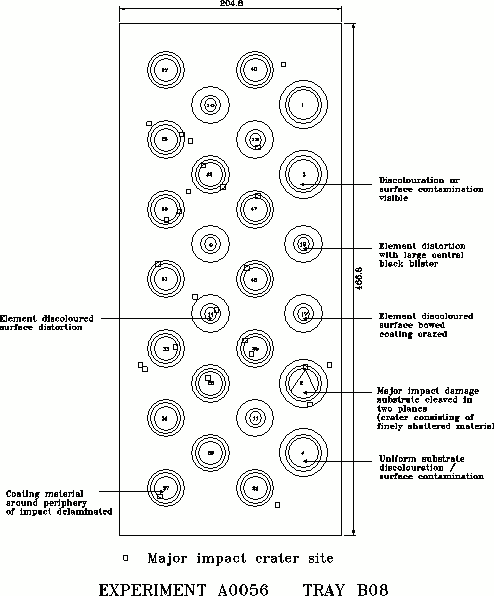