LDEF was deployed at an altitude of 482km. At this orbital altitude, three sources of energetic particles dominate most of the penetrating charge particle radiation encountered - high energy galactic cosmic rays and geomagnetically trapped protons, with energies between ~100-1000 Mev, and neutrons from the atmosphere. Additionally, where shielding is less than 1g/cm2 geomagnetically trapped electrons make a significant contribution and dominate the surface absorbed dose. All three sources are strongly shielded by the Earth's magnetic field. Due to this shielding, the absorbed dose induced by galactic cosmic rays and solar fluences are weak. Thus, trapped proton exposure is primarily responsible for the LDEF absorbed dose measurements. This occurs mainly during passes through the South Atlantic Anomaly where the magnetic field intensity is at its highest and is produced because the Earth's magnetic field is not centred on the Earth and generates "trapped orbits" for charged particles in the geomagnetic field. Under modest shielding, over 95% of the radiation exposure on the LDEF was from trapped protons encountered in this region. Penetrating charged particle radiation presents a significant challenge to the design and operation of a orbiting vehicle as many of the particles have sufficient energy to penetrate several centimetres of metal and produce significant levels of ionization inside the vehicle. A high level of radiation will significantly affect materials, chemical processes, and living organisms.

The galactic cosmic rays consist mainly of the nuclei of the elements of hydrogen through to uranium, these have a broad energy spectrum and high average energies of approximately 7 Gev/nucleon. The LDEF dose contribution from galactic cosmic rays was predicted to be about 6 rad, and decreases slowly with shielding depth than the trapped proton dose. The actual LDEF cosmic ray experiments, using about 20 of the actinide elements in the periodic table (i.e. Th, U, etc.) with nuclei atomic weights Z>65, showed this contribution to be closer to a value of 10 rad (0.1 Gray). Galactic cosmic ray particles bombard the Earth isotropically with a composition in the vicinity of Earth being ~98% nuclei and ~2% electrons and positrons. The absorbed dose was therefore dominated by the heavy nuclei. Rare solar flares that produce energetic particles with energies well above 1 Gev also contribute a minor dose component at all shielding depths.

The principal mechanisms that cause damage in dielectric coatings by ionizing radiation are electronic ionisation and atomic lattice displacements. Charged particles such as protons, deuterons, and helium ions mainly interact with the electrons in the dielectric, whilst neutrons interact only weakly with electrons, principally colliding with nuclei and displacing their position in the lattice. As atoms are considerably larger than their nuclei, interactions with the atomic nucleus is much less probable. For charged particles, heavier than the electron, little change in direction or energy is suffered by the particle. The electron collision may be knocked out of the atom, producing an ion and free electron. By this process chemical bonds may also be broken and produce free radicals, new chemical species or induced radioactivity.

Electrons and ions produced by these events can be trapped at lattice defects or other low energy positions where a change to the absorption spectra of a material is possible. Darkening or other discoloration can result, and the coating may degrade as a result of the radiation.

Comparing the proton fluence experienced on the LDEF with that required for the EOS HIRDLS instrument shows the samples on board the LDEF were exposed to a greater fluence of trapped protons than that required by the ionizing radiation requirements for EOS spacecraft instruments. Figure 7 shows the required surface incidence fluence of trapped protons and cosmic ray protons for a five year polar orbit at an altitude of 705km with values ranging from approximately 8x109 to 2x105 compared to a range of 5x109 to 1.2x107 experienced by the LDEF. 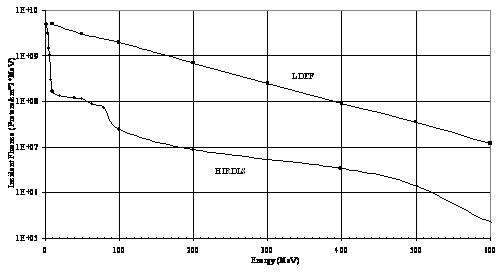