The effects of atomic oxygen (monatomic oxygen) bombardment were originally highlighted with the early shuttle flights, by a visible effect on exposed polymer surfaces such as Kapton, where changes in characteristics due to atomic oxygen were found to cause undesirable temperature excursions in low Earth orbit and shorten the useful lifetime of many spacecraft components. It has also been proposed that atmospheric atomic oxygen plays a role in the production of a visible shuttle glow upon re-entry into Earth's atmosphere. Post-flight analysis of painted surfaces on the shuttle were also noted to have been returned with a brighter surface than prior to launch.

Atomic oxygen bombardment contributes significantly to surface degradation, erosion, and contamination of materials with which it collides due to its high speed of 1.15 km/sec compared to an average speed of a spacecraft relative to the atmosphere of 7.24 km/sec, and high collision energies (4-5eV). At this energy, atomic oxygen initiates a number of chemical and physical reactions with the materials and penetrate surfaces, substituting oxygen to form oxide compounds, more stable than those originally present. The element exists in monatomic form in the upper regions of the atmosphere (>400km altitude). The effects of atomic oxygen bombardment on a polymer film produces a heavily etched and eroded surface. Polymer films that have been coated with thin metallic layers have suffered atomic oxygen attack through pre-existing pinholes in the metal film, this leads to underlying cavities which eventually produces complete loss of the polymer, leaving a free-standing metal film. 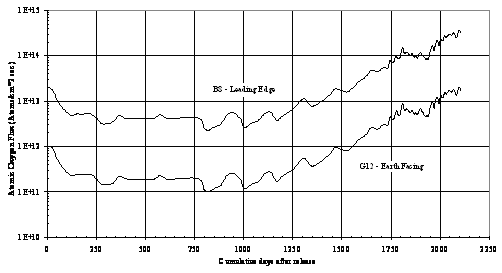 Figure 8, Atomic oxygen flux vs time for LDEF rows B8 and G12 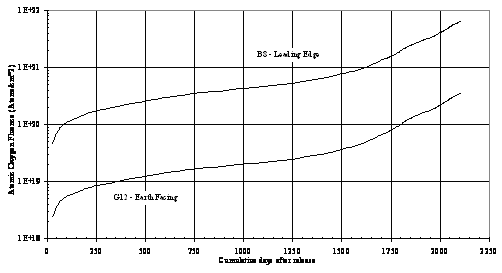 Figure 9, Atomic oxygen fluence vs time for LDEF rows B8 and G12 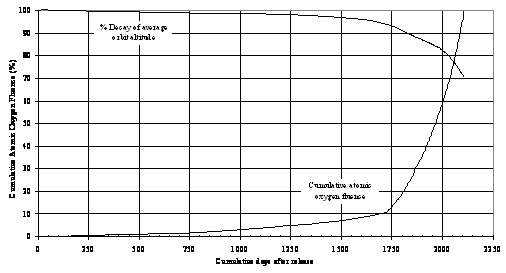 Comparing the atomic oxygen fluence experienced on the LDEF with that required for the EOS HIRDLS instrument shows the expected atomic oxygen bombardment to be equivalent to that experienced by the optical components on the leading edge tray (B8). Figure 11 shows the expected atomic oxygen fluence profile for a five year polar orbit at an altitude of 705km with values ranging from approximately 8x1020 to 1x1020 , this compares to a range of 1x1020 to 5x1021 experienced by the LDEF leading edge tray B8. It should be noted that the optical elements on the LDEF experiment were under direct exposure to the flux of atomic oxygen, whilst in HIRDLS the filters are internal to instrument, providing far greater protection for survival. 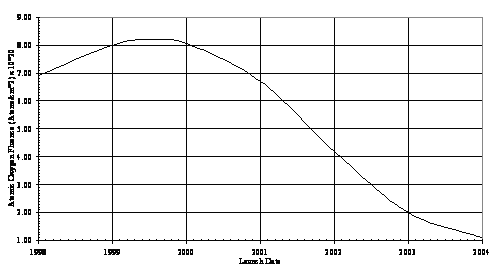