Zinc Sulphide (ZnS) exists both in a natural and synthetic crystalline form possessing cubic (Zinc blende) or hexagonal (Wurtzite) lattice structures. Substantial amounts of impurity, principally iron, are usually found in the composition of natural ZnS minerals that affect the physical and optical properties, preventing reproducible characterisation. A variety of techniques have been developed to obtain synthetic ZnS in large, high purity crystals, including evaporation, sublimation, high pressure growth from molten ZnS, and sintered hot-pressed polycrystalline ZnS (IRTRAN 2). For the purposes of this study, optical characterisation was performed on CVD ZnS (Cleartran®) material. This is chemically formed under low pressure, high temperature conditions through a reaction furnace to produce traditional ZnS which is then post deposition treated to improve scatter and homogeneity properties, by removal of zinc hydrides from the material. The electronic absorption edge at approximately 0.33µm corresponds to an energy band gap of 3.7eV, and a transparency region until approximately 10µm where multi-phonon absorption dominates. The short wavelength roll off is attributed to the combination of intrinsic Rayleigh scattering of microcrystals in its structure, and a significant contribution of extrinsic scattering caused by Zn-H (zinc hydride) impurity absorption and sulphur vacancies incorporated during the vapour growth process, as proposed by Lewis et al.

A number of investigations have been performed on the multi-phonon lattice absorption spectra of ZnS. However, it was not until 1980 when consistent thick samples of CVD polycrystalline ZnS became commercially available that definitive measurements of the two and three phonon regions could be made. Klein and Donadio performed critical point analysis of two-phonon absorption modes .

Feldman et al measured the refractive index of ZnS at 293K from which the following polynomial regression coefficients could be fitted across the wavelength range from 1-18µm :

The effects of temperature across the range 243-343K had been reported by Barron et al across the 3-5µm and 7-12µm bands. This dispersion model was compared to measured values obtained by Wolfe et al at 295.9 and 84.9K from which a mean variation in refractive index over the 2-14µm range averaged 0.02% representing only a 5x10-4 difference in refractive index. 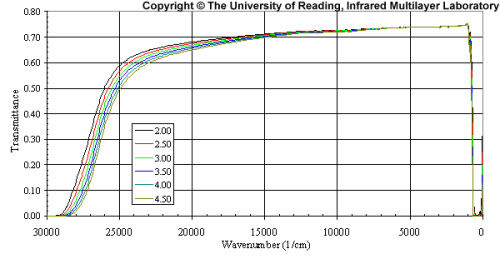 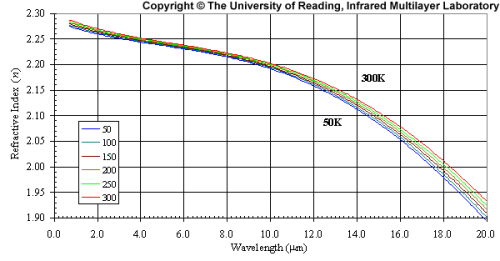 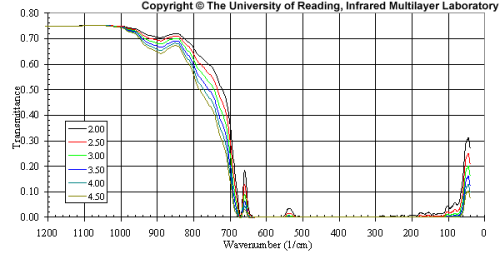 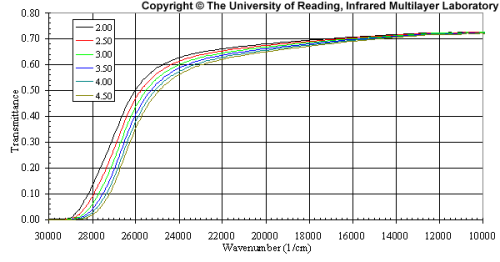 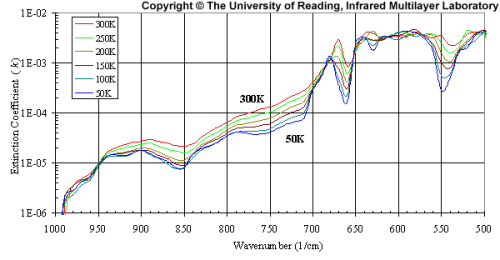