Germanium has proved to be the most useful semiconductor substrate for applications as a window or lens material in the 1.6 - 18µm region. Having the highest refractive index (n ~ 4.0) of any of the infrared bulk transmitting substrate materials and low dispersion properties across a wide range of temperatures avoids chromatic aberration in many applications. This combination of high refractive index and low dispersion also means imaging by a single Ge lens with low f-number is easily achievable. Its surface hardness and robust mechanical strength also aid applications where ruggedness is a requirement. It is also non-hydroscopic, non-toxic and possesses good thermal conductivity.

Both germanium and silicon have a diamond type structure, where each atom is surrounded by four adjacent atoms occupying the corner points of a tetrahedron, to which it is bound by covalently bonded electron paired bonds. The diamond structure is considered as two interpenetrating face-centred-cubic lattices, in which one lattice is displaced from the other by one quarter of the main body diagonal. The vibration modes experienced from this arrangement consist of the displacement of one sub-lattice with respect to the other, giving rise to displacements and therefore polarizations that are exactly opposite and 180° out of phase producing no resultant polarization and hence no coupling mechanism to the incident radiation. This is the principal reason no Reststrahl type absorption occurs in the Group IV elements, particularly as there is no dipole moment (homopolar) to couple with the incident radiation. However, since there are two atoms per unit cell, there are still optical and acoustic branches of the phonon dispersion curves to generate the multi-phonon absorption.

The multi-phonon absorption profile in germanium is complex, consisting of several types of phonon vibrations, primarily due to the transfer of energy from low energy photons to free carriers, this is accompanied by the transfer of momentum between free carriers and phonons in the crystalline lattice. For the absorption to occur, these processes must coincide jointly to retain the conservation of energy and momentum. The mechanism for the two phonon absorption is that one of the vibrational modes induces a charge on the atoms and a second mode simultaneously causes a vibration of the induced charge producing a second order electric moment and coupling to the incident radiation. This electric moment will occur at a sum or difference in frequency of the two phonons, giving discrete absorption bands at these frequencies.

Accurate dispersive refractive index data has been extensively investigated over a number of years. In 1976, Icenogle et al reported refractive index values for a discrete series of four temperatures between 297K and 94K and wavelengths between 2.5 and 13µm. Barnes and Piltch utilised this data to derive a fitted temperature-dependent modified Sellmeier equation (1-8) and published the following values for the coefficients in 1979

Calculations from this equation has been evaluated from which accurate values for high-grade optical quality germanium are within 0.025% or better, over the 2.5-14µm range, and are considered sufficiently accurate to extrapolate to 40µm. From this model, the refractive index varies over the temperature range of 250K by approximately 45ppm/K from a mean temperature coefficient (dn/dT) of +4.1x10-4 K-1 between 2-20µm.

Absorption of n-type single crystal material was originally found by Capron and Brill in 1973, to be superior to that of p-type germanium from ninety two samples investigated with resistivities ranging from 0.9Ωcm to 57Ωcm. They also found that the absorption increased with increasing temperature. The maximum transmittance derived from this experiment, at 300K and 10.6µm, was for samples doped with antimony to a resistivity of 5-10Ωcm with n-type conductivity producing an absorption coefficient of 0.02cm-1 . This agreed well with similar measurements by Horrigan et al for n-type single crystal Ge with impurity concentrations less than 1013 cm-3 using a CO2 laser. Further studies by Osmer et al in 1989 found antimony doping can improve the high temperature transmission of Ge, between 70-120°C at the expense of degraded room temperature performance across the 8-12µm region. Thornton conducted experiments on low resistivity (0.85-3.8Ωcm) germanium between 7-20µm across the 70-150°C range of temperatures.

Free carrier (electron and hole) absorption can occur throughout the transparent region of the infrared spectrum in addition to the intrinsic absorption processes created by doping to produce n-type or p-type material. Holes in germanium absorb more energy than electrons, creating greater absorption. For intrinsically neutral Ge, the number of holes times the number of electrons is a constant. Reducing the number of holes to produce lower resistivity material is performed by increasing the number of electrons by the addition of group V donor atoms. However, excessive addition leads to higher electron concentration and subsequent increased absorption. Therefore, achieving high quality optical germanium is a compromise between dopant levels and intrinsic hole concentration. Germanium is not usually used at high temperatures because of the excessive absorption caused by the increased number of thermally generated holes. However, doping to lower n-type resistivities can make it useful at temperatures as high as 80°C. 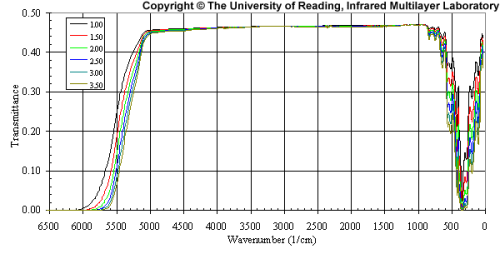 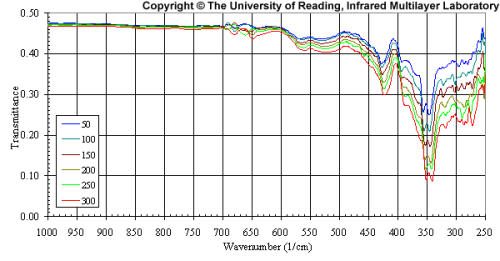 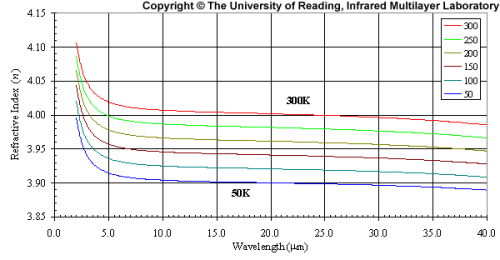 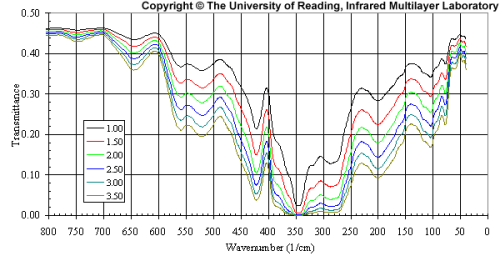 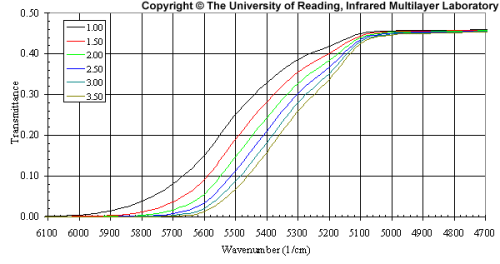 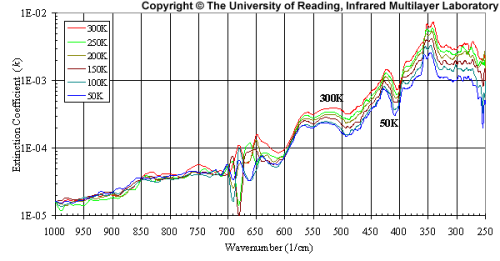