In conductors, absorption due to the presence of a cloud of free electrons or holes is continuous, with a magnitude that increases approximately as the square of the incident wavelength. Overlapping valence and conduction bands provide high reflectivity but prohibit transparency throughout the entire infrared. As the electron energy bands become separated in semiconductors however, the extent to which free electron carriers cause absorption becomes dependent upon the size of the energy gap at any given temperature, and the absence of impurities.

The electronic absorption processes at the higher frequency end of the infrared spectrum caused by band-to-band or band-to-exciton (electron in an electrostatically attracted combination with a hole) transitions can be divided into four main categories for semiconductor materials;

At frequencies close to the electronic absorption edge, a change in the bandgap (Eg) of the crystal by a fraction of an electron volt can change the absorption coefficient (α) by nearly four orders of magnitude. By measurement of the spectral position and profile of the absorption edge, values for the energy band-gap (Eg) can be determined, together with other general information about the energy states either side of the forbidden band responsible for electrical conduction. However, the estimation of the energy gap from the absorption edge is not a straightforward for the following reason;

As the momentum of a photon (h/λ) is very small compared to the crystal momentum (h/a), where a is the lattice constant, the photon-absorption process should conserve the momentum of the electron. However, the absorption coefficient (α) for a given photon energy hf is proportional to the probability (Pi,f) for the transition from the initial state (ni) to the final state (nf) , the density of electrons in the initial state, and also to the density of available final states. These processes must be summed for all the possible transitions between states that are separated by an energy difference equal to hf,

Therefore both the exact positioning and shape of the electronic absorption edge cannot easily be predicted or modelled through solid state theory without detailed knowledge of all the allowed & forbidden, direct & indirect transitions available, together with knowledge of the density of electrons as given by the product of the density of states and the Fermi-Dirac function, with the probability of an electron level possessing an electron given by:

where, E is the energy level, Ef is the Fermi-energy level, k is Boltzmann' s constant and T is the absolute temperature. The following figure illustrates the various electronic absorption energy band transitions available in a typical semiconductor material. 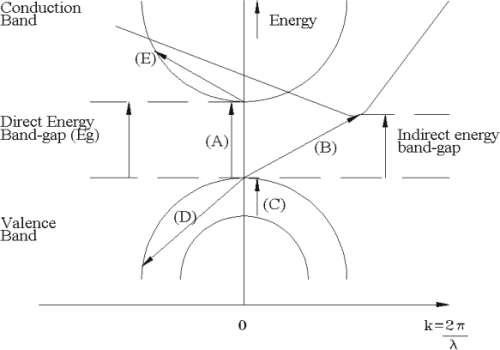 Optical materials that are opaque in the visible, because of comparatively small bandgaps (≤ 1.25eV), are arbitrarily classified as infrared semiconductors whilst materials of larger bandgap, and whose lattice absorption is present in the far-infrared are insulators.