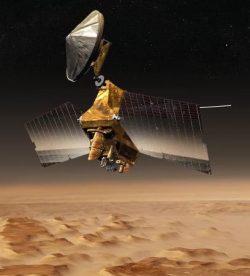 The Mars Climate Sounder instrument, part of the Mars Reconnaissance Orbiter mission, will observe the temperature, humidity, and dust content of the Martian atmosphere, making measurements that are needed to understand Mars' current weather and climate, as well as potential variations that may occur.

The Mars Climate Sounder looks at the horizon of Mars from orbit to observe the atmosphere in vertical slices. It takes measurements every 5 kilometres down into each slice through the atmosphere. These "profiles" are combined into daily, three-dimensional, global weather maps for both daytime and night-time. The weather maps show temperature, pressure, humidity, and dust in various layers of the atmosphere.

MCS is a nine channel infrared radiometer employing filter radiometry. These channels are distributed between two identical co-boresighted telescopes. The two telescopes employ room temperature linear array thermopile detectors at their focal plane. The University of Reading has been responsible for the design and fabrication of precision bandpass filters between 11.5 and 25.0 microns.