Map of the global Sea Surface Temperature (SST) from space provided by the AATSR instrument.

Thin-film optical filter research at the University of Reading is a unique and enabling technology that permits astronomers and meteorologists to gather data leading to increased understanding of atmospheric and astrophysical phenomena. Infrared filters are the key optical components in many satellite telescopes for Earth observation, planetary research probes and infrared astronomy. They form the eyes of the instrument to separate light into wavebands in order to measure temperature, gas composition, water vapour, dust clouds and aerosols. This data is used to generate accurate atmospheric and environmental circulation models for global climate studies, and measure properties of the universe for stellar and planetary formation theories.

Details of the impact

The Infrared Multilayer Laboratory is recognised as a world leading facility in the field of optical thin-film interference coatings for Space and Astronomy. The beneficiaries from this research flow through to the collective public user community as satellite data for improved weather forecasting, atmospheric and climate research, and observations of the universe through infrared astronomy. The following examples highlight the impact of this research to three differing sectors of the remote-sensing community. 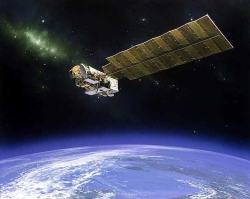 The NASA EOS-AURA High Resolution Dynamics Limb Sounder (HIRDLS) is an infrared instrument for atmospheric monitoring of global temperature and trace constituents from the upper troposphere into the mesosphere. The instrument operates with 42 precision narrow-band interference filters integrated into a focal plane detector arrays to provide simultaneous multi-channel observations of a target scene at discrete wavelengths across the thermal waveband.

Launched on the NASA Aura spacecraft in a polar orbit in 2004, the instrument provides an unprecedented wealth of atmospheric information with enhanced resolution relative to earlier instruments. HIRDLS can monitor rapid vertical changes in temperature and composition previously unobserved on a global basis and provides atmospheric measurements over virtually every point on the Earth surface in a repeatable pattern, permitting observation of atmospheric phenomena changes in the same geographic locations throughout the lifetime of the mission. 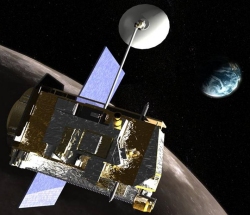 The Diviner radiometer experiment on the NASA Lunar Reconnaissance Orbiter (LRO) uses infrared filters to investigate the thermal radiation, mineralogical composition and structure of the lunar environment to gather data as a prelude to future human exploration of the Moon. High precision narrow bandpass filters manufactured by the laboratory are used to identify possible locations of ice formation, map mineralogical rock compositions and lunar soils.

The filters provided crucial measurements during the Lunar LCROSS impact mission in 2009, witnessing energy dissipation and cooling during a planetary impact. The diverse mixture of water and high-volatility compounds is strong evidence for the impact delivery and cold-trapping of volatiles derived from primitive outer solar system bodies. Diviner has discovered further cold traps in the Moon's south polar region where sub-surface temperatures are cold enough to cold-trap water ice and other volatile species. Moon 'red spot' regions were discovered to exhibit high Silicic composition, quartz, silica-rich glass, alkali feldspar and pyroclastic FeO deposits provide evidence that the Moon is a complex body that has experienced a diverse set of igneous processes.

Infrared filters designed and manufactured by the laboratory for the NASA Mars Climate Sounder (MCS) experiment on the NASA Mars Reconnaissance Orbiter were deployed to observe the temperature, pressure, humidity and dust content of the Martian atmosphere. The measurements obtained through these filters are assembled into daily global maps to show how the Martian weather circulates and varies over time. Discoveries from this instrument have provided copious information about ancient environments, ice-age scale climate cycles and present-day atmospheric changes. Carbon dioxide snowfalls were also detected from south polar clouds, making Mars the only body in the solar system to exhibit this strange weather phenomenon. 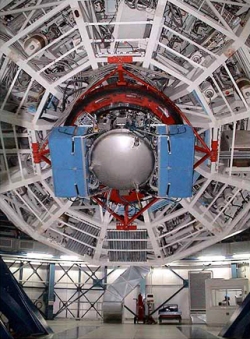 The laboratory were responsible for the spectral design and manufacture of narrow bandpass filters in the N-band (7.5-14 µm) and Q-band (16-28 µm) atmospheric windows deployed in all of these instruments. The successful manufacture of these complex filters has enabled scientists to investigate astronomical phenomena not previously attainable. The range of infrared filters distributed throughout the astronomical community has resulted in a vast collection of astrophysical discoveries ranging from;

The Infrared Multilayer Laboratory is a self-funding centre at the University of Reading that has been at the forefront of research in optical thin-film filters since the early 1960's. Infrared filters are specialist optical components constructed from multilayers of vacuum deposited thin-film materials that are designed to separate, isolate or block differing regions of light using the phenomenon of interference.

The laboratory is managed under the leadership of Dr Gary Hawkins, with a research focus on optical instruments for atmospheric remote-sensing and infrared astronomy applications. These are evolving subject areas from which the laboratory has actively conducted both fundamental and applied research in thin-film deposition technology to fulfil the demands of industrial and scientific communities.

The expertise and specialisation of the laboratory is founded on the physics of optical thin-film interference theory applied to the custom manufacture and spaceflight qualification of high performance coatings in the mid-infrared region, most often for use at cryogenic temperatures.

This research has involved adapting to new challenges of;

in the latest generation of advanced spaceflight instrumentation.

This research area extends the principals of thin-film design and manufacturing methods, based on Dr Hawkins PhD thesis, which describes the characterisation and application of absorptive and dispersive mechanisms to infrared materials for predictive multilayer filter design modelling. The laboratory has developed a unique and specialist infrared deposition technology utilising the optical and semiconductor properties of special dielectric materials to fabricate custom-made optical components.

Research, conducted by Dr Hawkins, developed the first integrated spectral systems model that was used to simulate the throughput performance and derive filter specification requirements using the entire optical instrument response. Funded by the NERC, the laboratory were co-investigators with responsibility for the spectral design, fabrication and performance verification of the HIRDLS optical layout. This involved optimising and tailoring thin-film multilayer designs to maximize the total system performance efficiency. Research from this instrument also demonstrated the first successful fabrication and deployment of precision miniature infrared filters into a focal plane detector array for use in a spaceflight instrument. The development of these miniature filters enabled observations of different atmospheric trace gas species from the same target scene to be measured simultaneously, compared to previous discrete channels. These innovations have been adopted for other planetary reconnaissance missions to investigate the atmosphere and chemistry of Mars and the Moon.

Further experimental research and knowledge gained from characterising the optical and mechanical properties of infrared materials, together with vacuum-deposited thin-film engineering and system design modelling was instrumental in deploying a new generation of cooled filters for infrared astronomy. This research involved the development of improved, mechanically robust, stress-free infrared coatings using environmentally compliant replacements of previous toxic, hygroscopic and radioactive materials. Development of these filters subsequently provided a consortium of international astronomy institutes with the capability to observe and correlate astrophysical phenomena at new and critical wavelengths.