Back to Mars for the closest look yet 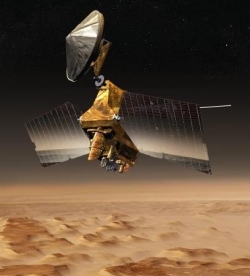 On August 10th 2005 Optical filters, part of the Mars Climate Sounder (MCS) instrument on NASA's Mars Reconnaissance Orbiter (MRO), manufactured at the University of Reading will be launched from Cape Canaveral in Florida beginning its journey to the red planet. For scientists from Oxford, Cardiff and Reading it will be an intense time as it will be their third attempt to get their instrument to Mars on board a NASA spacecraft.

The main aim of the MRO mission is to seek out the history of water on Mars. This will be achieved by a suite of instruments which will zoom in for extreme close up images of the Martian surface, analyse minerals, look for subsurface water, trace how much dust and water are distributed in the atmosphere and monitor the daily global weather.

UK scientists from Oxford, Cardiff and Reading Universities are involved in the Mars Climate Sounder (MCS) instrument - essentially a weather satellite for Mars. It will profile the atmosphere of Mars detecting vertical variation in temperature, dust and water vapour concentration.

Professor Fred Taylor from Oxford University is a co-investigator on the Mars Climate Sounder instrument on MRO explains more about what he hopes to learn from this latest mission. "No previous mission to Mars has carried a dedicated atmospheric sounder, capable of obtaining global profiles of the key meteorological variables with complete coverage and high vertical resolution."

He adds, "We believe this will be the key to understanding the present climate regime on Mars much better. This in turn will be essential for future missions to the surface of the red planet - as payloads get larger, the atmospheric conditions for a successful landing become more critical. The Climate Sounder project will also lead to computer models of the Martian atmosphere of comparable complexity to those being used to study global warming on the Earth, an essential prerequisite to working backwards to understand why conditions on Mars changes so much, from warm and wet a billion years ago to the cold, dry desert we see today."

With three state of the art cameras on board MRO will be able to take an unprecedented look at the surface of Mars – homing in like a microscope on specific features. The Hi-RISE camera will provide the most detailed picture of the surface focusing in on objects down to the size of a small table. This has raised the prospect that it potentially could look for signs of lost Mars missions, such as the UK built Beagle 2 lander and NASA's Mars Polar lander.