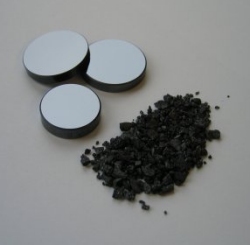 Dr Gary Hawkins and Dr John Bowen have been successful in their bid for a EPSRC/DTI Sustainable Technologies Initiative for a study into 'Mixed Metal Oxides as Alternatives to Cadmium in High Temperature Pigments and Optoelectronic Materials'.

Legislation has steadily been introduced throughout the world to restrict the use of heavy metals, particularly cadmium and lead, in ceramic and related products. Removal of cadmium reds, oranges and yellows has been hampered by the absence of any viable alternatives that produce similar colour intensity, high temperature stability and durability. The F-COLOURS project firstly aims to develop non-toxic alternative pigments based on mixed metal oxide chemistry, with particular focus on the tin(II)-tin(IV) couple and the use of colloidal precursor routes. The novel materials developed during the course of the project is also expected to exhibit optoelectronic functionality and, as such the materials will be processed both in bulk and thin-film form for subsequent evaluation in high technology optical applications. The final aim of the project is to fully characterise the novel mixed metal oxide materials using appropriate state-of-the-art analytical techniques, and to determine their potential applicability in high technology industries.

The research to be conducted by the University of Reading will involve the thin–film deposition processing and characterisation of single layer thin-films and multilayer structures of differing elemental composition and stoichiometries by using a combination of thermal, reactive RF sputtering, and plasma assisted chemical vapour deposition methods on transparent visible and infrared optical substrate materials. Characterisation of the optical and semiconductor properties of the deposited thin-films shall be performed by spectroscopic analysis throughout the visible and infrared spectrum which is then to be modelled and compared with both existing cadmium based thin-film materials together with investigating the films for other novel optical properties. Mechanical and physical performance of the resulting thin-films will additionally be assessed by environmental testing according to recognised coated optics specifications these will include thermal cycling, humidity testing and microscopy to determine film structure.

Tin oxides have played a major role in the ceramics and optical glass industries for many years and its non-toxic nature has also led to many food-contact applications. With regard to the development of new colours, the potential to generate colour centres via mixed metal oxidation state species utilising the Sn(IV) / Sn(II) couple is apparent, as is the ability of colloidal tin oxide to chemisorb transition metal ions from solution to form highly-coloured doped tin oxide species. The use of colloidal tin oxide precursors for forming coloured and functional pigments offers a number of advantages over conventional routes. The more intimate mixing of the pigment components using colloidal sol-gel technology (as compared to solid-state mixing) should result in more intense colours, and firing temperatures should be markedly reduced, leading to lower energy costs. Recent market statistics show that cadmium pigment consumption in the EC is approximately 1,000 tonnes per annum. Hence, the replacement of cadmium colours by non-toxic alternatives would be of considerable environmental benefit. In addition to the rapidly growing demand for functional pigments, a further aim of the project is to assess the potential of the newly developed pigments and the associated technology platform in the field of optoelectronic materials. Such materials are likely to exhibit a wide range of useful properties (e.g. catalytic, optical, semi-conductive) and these may ultimately lead to applications beyond the confines of industrial pigments, when used in the form of bulk powders or thin-films.

Other partners in the project include: ITRI Limited – this is a research organisation primarily funded by the tin-producing industry. ITRI has a state-of-the-art research and development facilities, and is the world's foremost authority on tin, its alloys and chemical compounds. Johnson Matthey plc – is an advanced materials technology company and a leading manufacturer of inorganic pigments, glass and plastics industries. Johnson Matthey have particular experience in the development of novel colours through utilisation of mixed metal oxidation state species and will be largely involved in synthesis, characterisation and industrial scale-up of novel materials.