VLT Imager and Spectrometer in the Infrared 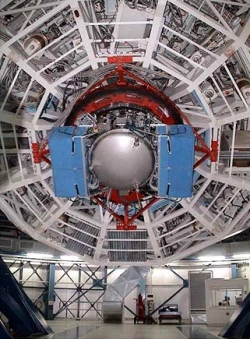 Optical filters, part of the VLT Imager and Spectrometer in the Infrared (VISIR) instrument, manufactured at the University of Reading have successfully installed in the Melipal Very Large Telescope at the European Southern Observatory Santiago, Chile.

The VLT Imager and Spectrometer in the Infrared (VISIR), installed in the Melipal Very Large Telescope, is a collaboration between French and Dutch institutes and the European Southern Observatory. The instrument allows greater penetration in environments where dust is pervasive, notably in the large molecular clouds that obscure star formation and evolution.

The VISIR device operates at wavelengths up to 40 times longer than visible light. It is cooled to -250° to prevent faint mid- IR signals being overpowered by the instrument's metal and glass, and its 256 X 256-pixel array detectors are kept even colder. It is kept in a vacuum to prevent icing over, and it had to be mounted so that it would remain rigid to within a few thousandths of a millimetre as the telescope tracks objects moving across the sky.

The device has rewarded its engineers with thermal infrared images of dust and gas heated by invisible stars in the distant region of the Milky Way. Principal investigator Pierre-Olivier Lagage of CEA said that 20 minutes' observation with the VISIR is equivalent to a night's observation on a 3 to 4 metre telescope. A scientific goal is to use the enhanced telescope to detect and monitor the signal from the black hole at the centre of our galaxy.