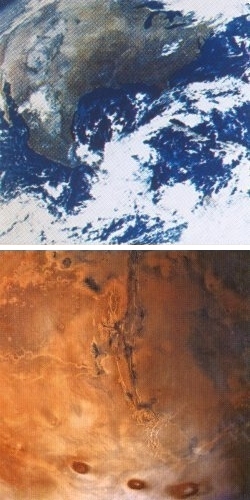 The University of Reading is reaching new heights through the work of its Infrared Multilayer Laboratory which designs and manufactures infrared optical equipment for the international astronomical and space research communities. The team have developed high specification filters and coatings that can survive the ultra low temperatures and extreme dry conditions experienced outside of the Earth's atmosphere.

Optical filters built at Reading have been used on a range of high profile space exploration projects including the Galileo and Cassini probes destined for orbit around Jupiter and Saturn, and various missions destined for Earth's nearest neighbour, Mars.

The filters are designed to only allow infrared light to pass through them, which is useful for collecting a wide range of environmental data. On Earth observation satellites they help collect detailed data on the state of the atmosphere, including variations in chemical composition, cloud coverage and aerosols, which are particles that can trap moisture and heat high in the atmosphere. These data help scientists learn more about the complex processes at work in our atmosphere and to map and monitor phenomena such as the greenhouse effect and global warming.

Elsewhere in the solar system, the filters will be at work on the Mars Observer and Mars Reconnaissance Orbiter, which is a joint project run by the University of Oxford and the Jet Propulsion Laboratory due for launch in 2005.

The team are strengthening their reputation as a world leader in the supply of infrared coated optics, which will be helped by a recently awarded major international contract for filters for new generation atmospheric research and weather forecasting satellites.