The real part (n) of the complex refractive index (N=n-ik) of an infrared dielectric or semiconductor material is not independent of the extinction coefficient (k) but was proved by Kronig in 1926 to be related through the Kramers-Kronig relationship to take the form;

where P is constant for the material and ω the angular frequency (2π/λ). The absorptive term 2nk is integrated over all frequencies (ω′) for which there is no absorption. Therefore in a material containing absorption, any change in the value of n is controlled by the size of the absorption. At both short and long infrared wavelengths the deviations from this relationship are associated mainly with k rather than n, therefore the transmission tends to be affected more than the reflectivity.

A similar behaviour pattern is found in the spectra of all dielectric and semiconductor materials, namely a continuum of absorption at short wavelengths preceding an electronic absorption edge and succeeded by the interband transparent region and subsequent lattice absorption. The transparent region is subject to increasing absorption from charge carriers, if present, and is then itself interrupted by lattice resonances and harmonics, each contributing to a significant change in the refractive index dispersion profile.

All materials exhibit this decline in refractive index with increasing wavelength in the loss free interband region. The shape of the dispersion curve has been defined by the classical oscillator to which Sellmeier, Herzberger and Lorentzian mathematical functions have been applied. Modified temperature-dependent Sellmeier equations and polynomial regression coefficients have proved the most suitable curve fitting algorithms for calculations of refractive index data for the group IV and II-VI materials as defined by Equation ;

where the coefficients A-E are temperature-dependent.

In semiconductor and semi-insulator materials free electrons can also contribute to the dispersion profile setting up an intense absorption edge at short wavelength, as the absorption increases with wavelength due to free carriers. When carrier dispersion is superimposed on intrinsic material there is significant additional decline of refractive index towards long wavelength dependent upon the carrier concentration.

Generally, in dielectric materials, the low conductivity indicates that practically all the electronic charges are bound to their parent atoms, and are therefore not free to migrate under the action of an applied field. The action of an applied radiation field (E) to the bound charges in the dielectric displaces them relative to each other, the positive charges being displaced in the direction of the field, the negative charges in the opposite direction. Each atom thus acquires an electric dipole moment parallel to, and in the same direction as the applied field. This effect is the dielectric polarization with an electric polarization vector (P), and is defined as the electric dipole moment per unit volume. P is generally proportional to E and related by equation;

where εo is the permittivity of free space and χ′ is the real electric susceptibility constant for a given material at a given frequency and temperature, and is independent of E. To describe the combined effects of the applied field E and the electric polarization vector P the electric displacement is then added; 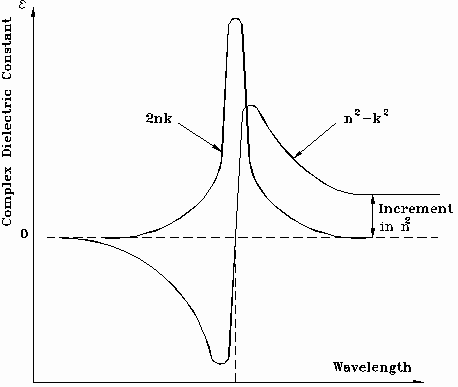 Dielectric dispersion at an absorption peak